Thulani Serero in the awards in Holland 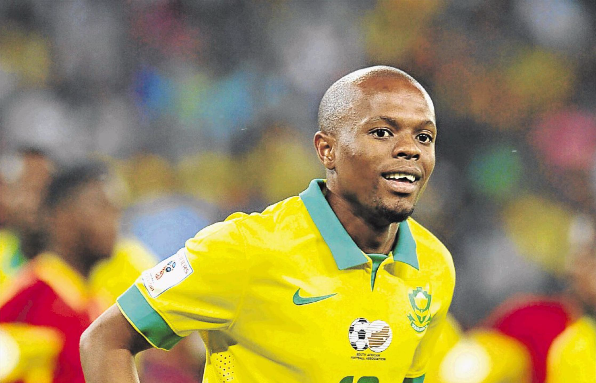 Thulani Serero has been named the best player in the Dutch league for the months of August and September and handed a trophy for his achievement as he expressed surprise with the ease of his adaptation to his new career at Vitesse Arnhem.

The 27-year-old‚ who sat on the bench for Bafana Bafana’s last three World Cup qualifiers‚ moved to Vitesse at the start of the season after a horror year at Ajax Amsterdam.

He had been cast aside at his last club‚ where he spent seven seasons in total after moving from Ajax Cape Town‚ and had just a handful of games in the reserves in his last season.

But Serero‚ originally from Soweto‚ bounced back in some style from the harrowing experience in his first months at Vitesse‚ who are third in the Dutch league standings with 14 points from seven games‚ four behind leaders PSV Eindhoven.

“I ‘m very grateful‚” Serero told the Dutch media after being handed the award at training this week.

“It is the consequence of hard work. It shows that I’m on the right path. And it is also a honour for the team that has begun the season so well.”

Serero won the award after amassing the highest player rating points for the opening two months of the season.

“I can’t really explain why I have my rhythm back so quickly after not playing for so long but I walked into a warm nest at Vitesse‚” he said.

“From the moment I arrived I’ve felt comfortable and for that I must thank everybody at the club. For the rest‚ it’s a real surprise for me.

“I was convinced that I could contribute but the truth always lies on the field.”

Serero said the foundation had come in a good pre-season training.

“The first weeks at Vitesse were really difficult. Everything felt painful.

“I had to get used to exertion again‚ the rhythm of training and match fitness. I had to get my strength‚ my speed and my conditioning back quickly.

“You can beat me at anything you like – cards or other games. But on the football field I want to win‚ that is where I am in my element.

“I am a control freak. I want to have matches always under control. That for me is the biggest progression now in my game but there is still a lot to do. There is still a lot of depth I need in my play and I have to keep striving for a higher level.”

Serero said he could not be happier.

“I am a footballer and now I playing again. It’s my lust and my life. To get this recognition makes me proud and makes me look forward to strive higher.”