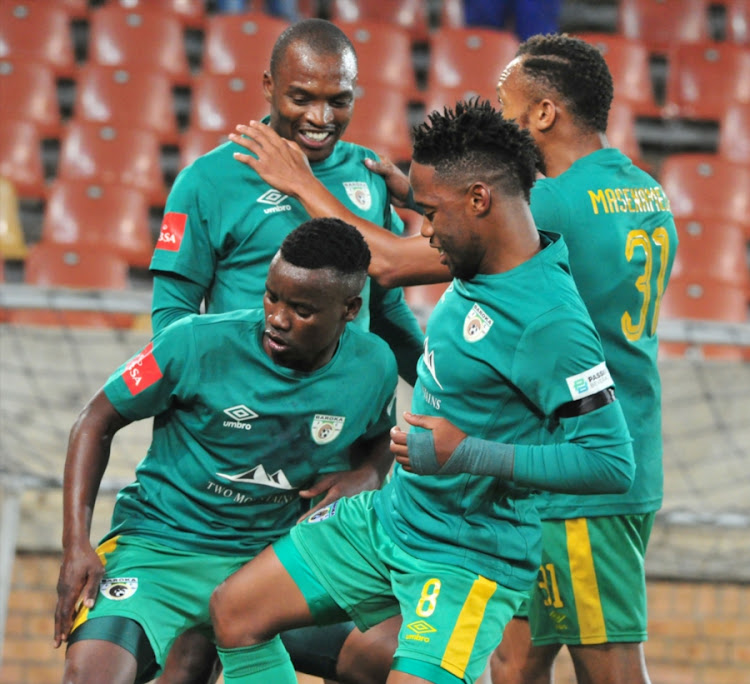 Sipho Moeti of Baroka FC celebrate with his teammates after scoring a goal during the Absa Premiership match between Baroka FC and Golden Arrows at Peter Mokaba Stadium on October 18, 2017 in Polokwane, South Africa.
Image: Philip Maeta/Gallo Images

Kgoloko Thobejane may not be completely satisfied with Wednesday's 1-1 draw at home to Golden Arrows at Peter Mokaba Stadium, but he will take some joy from the fact his Baroka FC charges are still top of the pile.

With this draw, Baroka retained their top spot on the Absa Premiership log and the two points cushion they had over the visitors ahead of the match in Polokwane.

Baroka looked set to take the three points after exciting midfielder Sipho Moeti put Bakgaga in front early in the first half but Siphelele Magabula had other ideas as he finished a sweeping team move for a 75th minute equaliser.

Bakgaga now have 16 points from eight matches, two ahead of Arrows.

Having flirted with relegation and surviving by the whisker through the promotion play-offs in their maiden Absa Premiership campaign last season, Baroka have punched above their weight this term.

And with 16 points at this stage of the season, the word relegation is guaranteed to have already disappeared from their vocabulories.

The Limpopo outfit, who are celebrating their 10th anniversary this year, will have an opportunity to stretch their lead when they host struggling champions Bidvest Wits at the same venue on Sunday.

But tricky trips to KZN and Cape Town to face AmaZulu and Cape Town City respectively in their November fixtures will be another test of character.

Sadio Mane was a surprise inclusion as Senegal named their squad on Wednesday for next month’s decisive World Cup qualifiers against South Africa.
Sport
4 years ago

The Premier Soccer League (PSL) has announced the dates and venues for the Telkom Knockout first round to be played on the weekend of October 27 ...
Sport
4 years ago