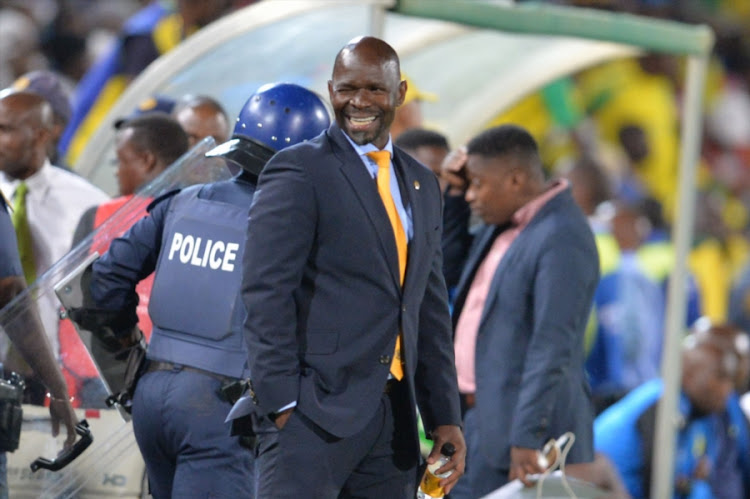 A smiling Kaizer Chiefs coach Steve Komphela during the Absa Premiership match against Mamelodi Sundowns at Loftus Versfeld on October 17, 2017 in Pretoria, South Africa. Chiefs won 2-1 to relieve pressure, at least for the moment, on the embattled coach.
Image: Lefty Shivambu/Gallo Images

With multiple injuries to some of his key defenders‚ Kaizer Chiefs coach Steve Komphela tweaked his rearguard and his clever enforced tinkering contributed to the side’s much needed 2-1 victory over fierce rivals Mamelodi Sundowns on Tuesday night.

Komphela normally favours the 4-3-3 formation but he changed things around by going with five men at the back with the notable inclusion of attacker Joseph "Tight" Molangoane as a wingback‚ where he gave a highly impressive performance.

Chiefs’ coach also risked by handing a debut to Siyabonga Ngezana as one of three centrebacks‚ who opened the scoring early in the second half.

And Komphela started with the inexperienced Philani Zulu at left wing-back alongside the other two centrebacks‚ Daniel Cardoso and Eric Mathoho.

“Pitso Mosimane does a lot of analysis. He goes through individuals and your structure‚” Komphela said after a stirring Absa Premiership victory at Loftus Versfeld that he described as a “nice birthday present” for club chairman Kaizer Motaung‚ who turned 73 on Monday.

The coach continued: “And maybe one of the ways to overcome such‚ if you don’t perform at your best‚ is that you have to tweak certain things.

“One of it was to tweak our structure because we have been playing 4-3-3 all along and getting results‚ and here and there we fluffed.

“At the back of not having any player to play at right-back because Kgotso Moleko and Ramahlwe Mphahlele are out‚ you are looking at who can play for you on the right.

“You say that if you play Molangoane in a back four‚ what are the chances of him coping – how far is the distance moving from the defensive zone up to the crossing zone.

“You also ask how his coordination with the centrebacks is going to be. He might not have the necessary coordination but you can help him by giving him the survival mode of having three across (centreback) because Sundowns will hurt you if their players run into the channels.

“The clear message from us one was the back five in terms of how we set up with Molangoane as a wingback on the right.”

Komphela said he took the risk of playing Molangoane in his reshaped back five because he knew that the winger once played as a right-back during his junior days.

“I worked with Molangoane at Platinum Stars and I know him when he was with (Alexandria academy owner Harold) ‘Jazzy Queen’ Legodi where he used to play right-back.

“The only thing was that can he cope at this level when you are playing against Mamelodi Sundowns and not a team that is modest.?

“As to whether he can play right-back is a topic that must be discussed‚ but as a wingback he can because he has the energy‚ football brains‚ he can attack freely and there are centrebacks that give cover when space is available.

“There was a stage where I thought he was getting excited because he wanted to attack unnecessarily‚ but he is a good player.”