I’m happy because Komphela is my 'brother', says Pitso after Chiefs defeat 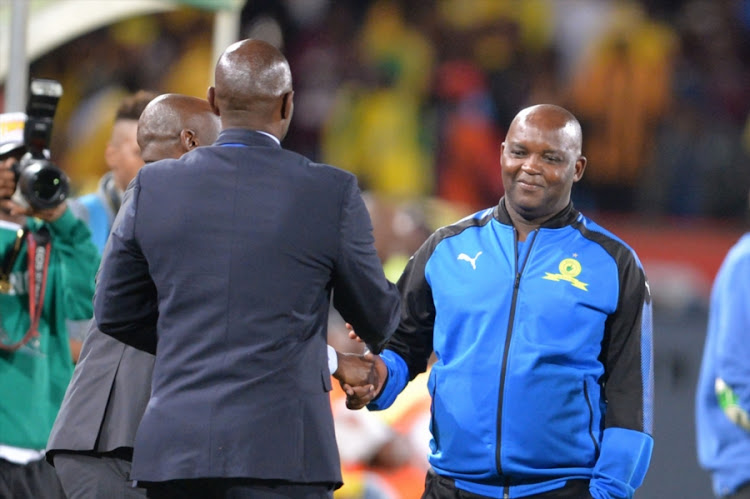 Mamelodi Sundowns coach Pitso Mosimane has often divided opinion and he was at it again when he expressed happiness that Kaizer Chiefs beat his own team 2-1 on Tuesday night to ease pressure on counterpart Steve Komphela.

Komphela went into the Absa Premiership match at Loftus Versfeld under pressure from his side’s fans as a result of a string of inconsistent performances and results.

Mosimane said the Chiefs coach must stay in the job for longer because black coaches in the Premier Soccer League (PSL) are few.

“I am happy because he (Komphela) deserves a break‚ he deserves a reliever and he is my brother‚” Mosimane said.

“You can see that black coaches are very few in the PSL‚ there is always an overseas coach coming in and we are short‚” said Mosimane after the match‚ adding that he hoped Chiefs beat Orlando Pirates in the Soweto derby at FNB Stadium on Saturday.

“Last year I lost a game to Serame Letsoaka against Bloemfontein Celtic and I said if I lost that game it will be to him.

“I am trying to protect also – you know it is not the first time I speak about Steve. I want him to stay in the job because I know there will be someone from Europe coming. I hope that he wins again on Saturday‚ he deserves a break.”

“Jingles” also said he would fine Downs midfielder Tiyani Mabunda for a needless red card for an unsporting challenge on Chiefs striker Bernard Parker in the 74th minute‚ which Mosimane said cost the Brazilians at least a point.

“I think Mabunda lost it‚ he got a yellow card because I was just about to take him out. It was careless and unacceptable for him to get a second yellow card – it does not matter what happened to Khama Billiat on the line.

“He has to control his emotions because he is a Bafana Bafana player and he can’t just lose his emotions and temper. He let the team down and I will fine him for that because it caused us the game to be honest. We were still in it but he deserved to be sent off.”

Mabunda on Wednesday morning took to social media to apologise for the red card.

To all those who follow & believe in me, i humbly apologise for the red card last night. I shouldnt have acted in that manner🙏#MajorSon🤳 pic.twitter.com/HTnEBxgswz

As a result of the red card‚ the central midfield strongman will be suspended for Sundowns’ league matches against AmaZulu on Saturday and Chippa United on October 28.

With multiple injuries to some of his key defenders‚ Kaizer Chiefs coach Steve Komphela tweaked his rearguard and his clever enforced tinkering ...
Sport
4 years ago