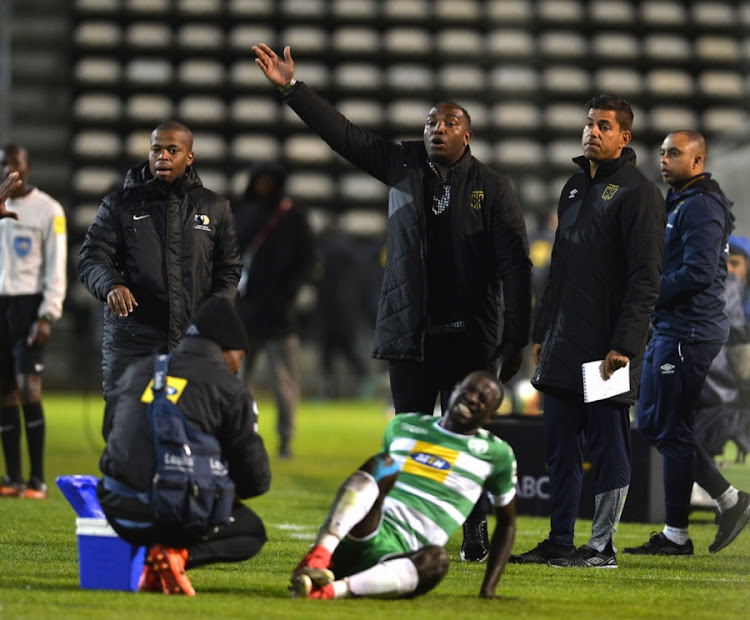 A frustrated Benni McCarthy says his days of experimentation at Cape Town City are over and from now on in he will select his strongest possible team for matches.

McCarthy watched as City mustered just a single shot on target in their dismal 1-0 Absa Premiership home loss to Bloemfontein Celtic on Tuesday night in a match in which he made eight changes from the side that lost the MTN8 final against SuperSport United at the weekend.

McCarthy was worried that his team had played 120 minutes on a heavy pitch at Moses Mabhida Stadium‚ but hinted he might have overdone it with the number of changes.

“I’ve got some hard decisions to make‚ but I think now it is just a little bit easier than what it was. Today I gambled and in this league you can’t gamble against any team‚” McCarthy said.

“We were nowhere near winning any football match. There was just nothing … I think within the whole 90 minutes we had one shot on target. That’s poor.

“They (Celtic) were very well organised at the back‚ a very flat (back) four‚ we just had no creativity‚ no nothing. It was dull. I think we left everything in the final.

“Even the changes that were made‚ it looked like they played on Saturday because there was just nothing. We didn’t have any fight‚ any heart – that is unlike the players that I know.

“It sometimes happens‚ your team runs out of ideas‚ but listen‚ they (Celtic) were fantastic‚ they used their big men really well‚ they were intelligent. The goal they scored‚ they caught us napping.”

McCarthy singled out goalkeeper Sage Stephens‚ midfielder Thabo Nodada and especially livewire winger Craig Martin as the only players who impressed against Celtic.

“He (Martin) is a player that comes from amateur football‚ he has hardly played at the highest level‚ but he had the biggest heart on the park today.

“Together with Thabo Nodada‚ they are the two smallest players‚ but those are players that when you go to war‚ I pick. They left everything on the pitch today.

“Martin was our toughest warrior out there and he is the skinniest – there is almost nothing on him‚ but he was standing up to be counted.

“He certainly played his way into this team and is one of the players that I am looking to go forward with.

“Unfortunately‚ the rest of the team couldn’t follow. That’s a shame‚ but at least now the team gave me a bit of a clear indication of not taking any more risks and rather continue with the strongest team.”

McCarthy says he was most disappointed that players who have not featured much in recent weeks did not grab their opportunity to shine.

“Today it was an opportunity for guys to come out and stake their claim. Some of them didn’t play against Ajax‚ Polokwane City‚ and missed the final‚ and today you get an opportunity to show what you have got – but not many players (took it).”

He also had a dig at some who he felt did not rise to the occasion at a cold‚ wet Athlone Stadium.

“This game was the perfect way for me to get to know the players better and which of them are willing to fight in any kind of circumstances.

"The Athlone pitch‚ it’s not your glamorous Cape Town Stadium‚ those kinds of things you take into account.

“Some players pick their battles and others are dying for an opportunity.”

Next up for City is an away clash against Chippa United on Sunday.