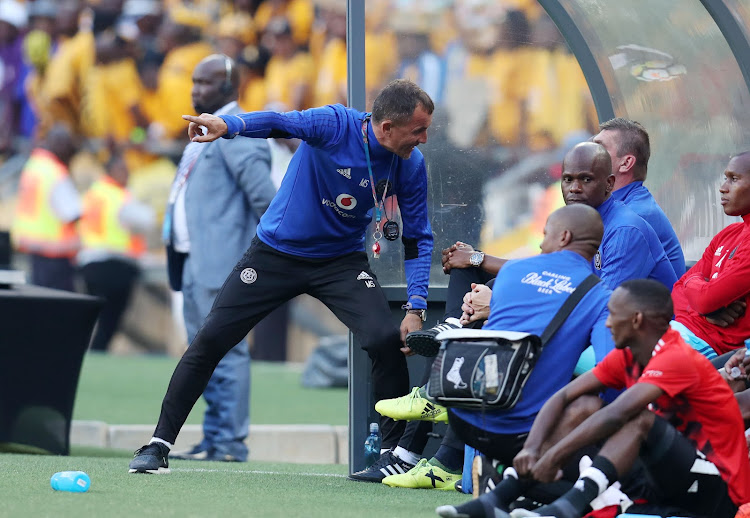 Orlando Pirates coach Milutin Sredojevic says he is not panicking just yet despite seeing his team drop nine points in their last four league matches.

In those encounters‚ including the exciting but goalless Soweto derby against Kaizer Chiefs at FNB Stadium on Saturday‚ Sredojevic's team failed to win.

"At this moment‚ I'm not worried about the results‚" said the Serbian coach whose plans at the start of the season was to help Bucs get at least ten points in every five matches.

Sredojevic's target was achieved without any hassles in the first five games in which his team collected eleven points‚ but it is in the second set of five where his team has been struggling‚ with three points collected out of the four games.

"I believe we are on course and people should not forget that we are a new set-up. We're still building our house.

"In the last four games we dominated play‚ the only thing that was missing is the issue of converting what we created."

Against Chiefs it was the same for Sredojevic‚ his team’s domination‚ especially in the first half‚ yielding nothing in terms of goals with "Micho" having opted to leave target man and top scorer Thamsanqa Gabuza on the bench.

Mpho Makola and Thabo Qalinge were among a number of Pirates players who had chances to put the game beyond Chiefs but poor finishing and some great goalkeeping by Kaizer Chiefs captain Itumeleng Khune kept them at bay.

"I'm convinced that we shall start to win given our performance against Chiefs. Again here we did everything but scoring. We are working hard to rectify this going forward.

"The performances we have had are injecting us with a great deal of confidence and I'm sure this will help us in our next games."

In the next week‚ Pirates will park their league games as they go to Durban to take on the high flying Golden Arrows in the first round of the Telkom Knockout on Saturday at Princess Magogo in KwaMashu at 3pm.

After that Sredojevic's team sharpness or lack of it will be further scrutinized when they host another stuttering giant Mamelodi Sundowns at Orlando Stadium early next month.

I won't end my career at United - Mourinho

Jose Mourinho has insisted he has no plans to leave Manchester United but admitted there had been no talks over a new contract.
Sport
3 years ago

The barbs of the Soweto derby being the draw-by will continue after a 0-0 Absa Premiership stalemate between Kaizer Chiefs and Orlando Pirates at FNB ...
Sport
3 years ago

Jordaan says he will comment on rape allegations‚ but not now

Soccer boss Danny Jordaan said on Saturday that he will respond to rape allegations levelled against him‚ but would not do so immediately.
News
3 years ago

The last time Milutin “Micho” Sredojevic coach Orlando Pirates in the Soweto derby FNB Stadium was blue and white and not the present‚ revamped‚ ...
Sport
3 years ago