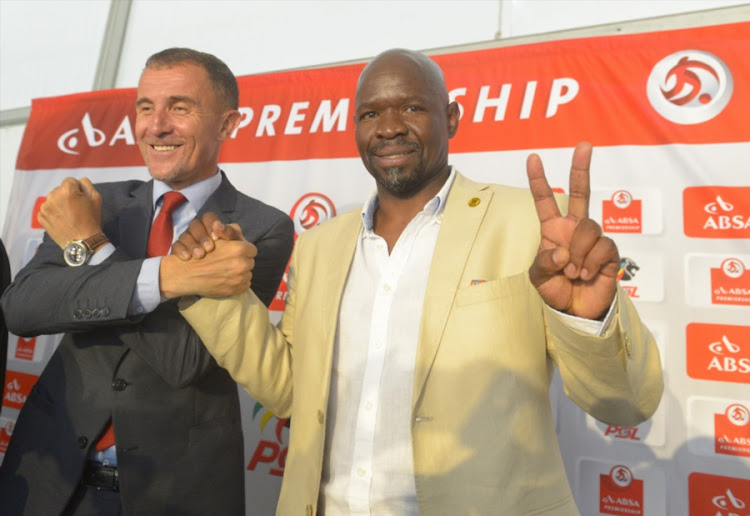 The derby again could not produce goals despite some relatively adventurous football from both teams but for anyone with a tactical view on the game‚ it was certainly quite watchable.

Sredojevic’s chess game he refers to began from the starting lineups.

Sredojevic anticipated this‚ and opted to leave his top scorer and derby performer Thamsanqa Gabuza on the bench.

“Tactics are all about covering your weaknesses and expressing your strong points‚ and at the same moment exposing your opponents' weak points and cover their strengths‚” Sredojevic said afterwards.

“Chiefs know us and we know them. The system that the coach played against Sundowns and again on Saturday‚ has three crucial weak points.

“And even he [Komphela] knows them. The space between (Mulomowandau) Mathoho and Philani Zulu on one side‚ between Siyabonga Ngezana and Joseph Molangoane on the other‚ and the space in front of Cardoso‚ behind Willard Katsande.

“Those were crucial spaces where we wanted to enter in attack and then to terminate and finish.

"It was not easy. The opponents were standing very well on the field - nicely packed. And when you are standing like this‚ you are practically resting the team. And the coach [Komphela] knows it‚ because we were just talking about it.

“And that energy gives them an edge and they were creating later in the game.”

The tactical maneuvering continued into the game as Komphela responded to a less convincing first half by switching from Katsande behind his “two box midfielders”‚ George Maluleka and Pule Ekstein‚ to Maluleka withdrawn next to Katsande. Later Gustavo Paez replaced Ekstein.”

In truth‚ Sredojevic’s game plan‚ while one could see what he was trying to do‚ only half-worked as Kutumela was largely wrapped up‚ and could not exploit the space behind Katsande.

Gabuza’s presence was missed because the big striker could have held the ball up and knocked it into the spaces behind Chiefs’ wing-backs.

Bernard Morrison replaced the ineffective Kutumela in the second half and created a few good openings.

But as a thinking man’s derby goes‚ this was not a bad one‚ and watching Komphela and Sredojevic pit wits was almost worth the entrance fee.

Manchester City boss Pep Guardiola has said it is "ridiculous" to suggest that the Premier League leaders can emulate Arsenal's Invincibles of ...
Sport
3 years ago

Juergen Klopp unfairly shifted the blame for Liverpool's defensive frailties onto Dejan Lovren by hauling him off in their 4-1 Premier League loss to ...
Sport
3 years ago

The 35-year-old veteran Katlego Mashego came on to deliver a first win for Chippa United’s new coach Tebeho Moloi after a run of five successive ...
Sport
3 years ago