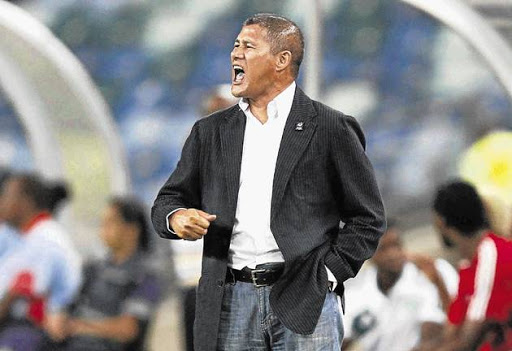 Coach Cavin Johnson, said "It is going to be a tough game for us because Chiefs are playing good football.
Image: ANESH DEBIKY/GALLO IMAGES

AmaZulu head coach Cavin Johnson says he is not sure which Kaizer Chiefs team are going to pitch up at Moses Mabhida Stadium for their Telkom Knockout last-16 match on Saturday.

Last week Chiefs beat Mamelodi Sundowns 2-1 away and on Saturday played to a goalless draw with Orlando Pirates at FNB Stadium, where coach Steve Komphela experimented with a cautious tactical approach.

Usuthu go into this cup game against Chiefs after they managed a morale-boosting 2-1 win over Sundowns in the league away on Saturday.

Johnson said: "It is going to be a tough game for us because Chiefs are playing good football.

"What I've noticed about them is that they play one way in the first half and the other way in the second half, like they did in the derby.

"I don't know which system they're going to use against us but they'll probably do the same."

He is pleased that they are hosting and are expecting a big crowd. "We know that Chiefs have a good following in Durban. We must do our homework and hopefully we will be able to put out another good performance."

In strikers Siyabonga Nomvethe and Mabhuti Khenyeza, Johnson has vastly experienced campaigners. Nomvethe, 39, and Khenyeza, 35, are expected to lead the attack against a shaky Chiefs defence.