Man United get Jones boost ahead of Tottenham clash 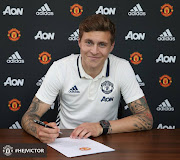 Image: Manchester United via Facebook The England international was replaced by Victor Lindelof in the first half of the 2-1 loss to Huddersfield Town last weekend.

Manchester United centre half Phil Jones has recovered from a leg injury and will be fit to play in Saturday's Premier League clash against Tottenham Hotspur, manager Jose Mourinho has said.

The England international was replaced by Victor Lindelof in the first half of the 2-1 loss to Huddersfield Town last weekend and the Swede's errors contributed to United's first league defeat of the season.

"I think Jones will be (back) because, today, he was on the bench and he told me he will be ready in case I need him," Mourinho said after Tuesday's 2-0 win over Swansea City in the League Cup fourth round.

"So I believe he'll be even better for Saturday. Apart from that, I have no news and no hopes (for any other players)."

United have not set a return date for injured midfielders Paul Pogba (hamstring), Michael Carrick (calf) and Marouane Fellaini (knee), while defender Eric Bailly is struggling with a groin problem.

Long-term absentees Zlatan Ibrahimovic and Marcos Rojo are expected to return from their knee injuries by the end of the year.

Jones's return will be a timely boost for second-placed United, who are tied on 20 points with Tottenham going into Saturday's clash at Old Trafford. (Reporting by Aditi Prakash in Bengaluru, editing by Nick Mulvenney)