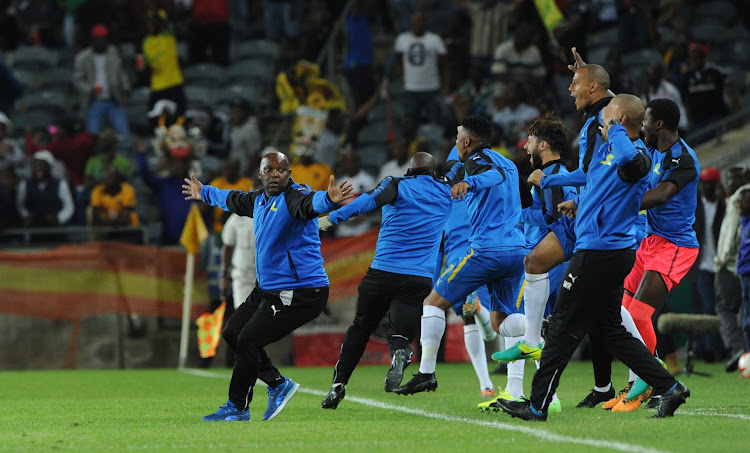 “Football will humble you‚” Mamelodi Sundowns’ coach Pitso Mosimane admitted after a string of shock defeats ended with a dramatic 3-1 Absa Premiership victory against Orlando Pirates on Wednesday night.

Mosimane said that Sundowns had their “shock therapy” with their three defeats before Wednesday night‚ and the African champions reacted well bouncing back in stirring fashion in a game of spectacularly scored goals at Orlando Stadium against the Buccaneers.

“It’s a reliever for us‚ to be honest. And we needed it. I said it when Steve [Komphela‚ Kaizer Chiefs’ coach] won against us. That I was happy for my brother because he needed a reliever. And some people were not happy with my statement.

“And [Bidvest Wits coach] Gavin Hunt said it: ‘Football is funny’. And he also got his reliever with a few wins lately.

“You’ve got to be humble a little bit. SuperSport [TV analysts] were busy with me that‚ ‘football will humble me’.

"Yes‚ it has humbled me.

“And it will still humble me. I’m still going to lose some of the games. And when things are bad you really see which people come out.

“But it’s life. If you don’t want to be criticised as a coach you should not be here.

“But‚ ja‚ Gavin Hunt said it – you cannot be a bad team overnight. But you also need a little bit of a wake-up call.

"You need to be a smashed a little bit and given a few ones.

“And then it’s a shock therapy. And then the team comes up.

"He added later: “But ja‚ football has humbled me.”

The game was marked by some spectacular goals.

The first by Hlompho Kekana‚ whose body was in the way of Abbubaker Mobara’s clearance for a ricochet in the first minute‚ not so much so.

But Kekana’s second in the 13th‚ with a spectacular lob from four metres inside his own half fumbled slightly by backpedaling Wayne Sandilands‚ was a wonder strike.

Marc van Heerden pulled one back for Pirates with a classy 34th-minute free-kick. Substitute Anthony Laffor blasted in a third for Sundowns in added time.

Oupa Manyisa shrugged off jeers from Orlando Pirates fans on what he described as an emotional night as he returned to face his old club in his new ...
Sport
4 years ago

Bidvest Wits horror start to the season worsened last night when they suffered their fifth defeat in nine matches succumbing to a determined Chippa ...
Sport
4 years ago

Sundowns come out tops against Pirates in a thriller in Orlando

Two audacious goals from Hlompho Kekana put Mamelodi Sundowns back on the winning trail as they again got the better of Orlando Pirates 3-1 in ...
Sport
4 years ago