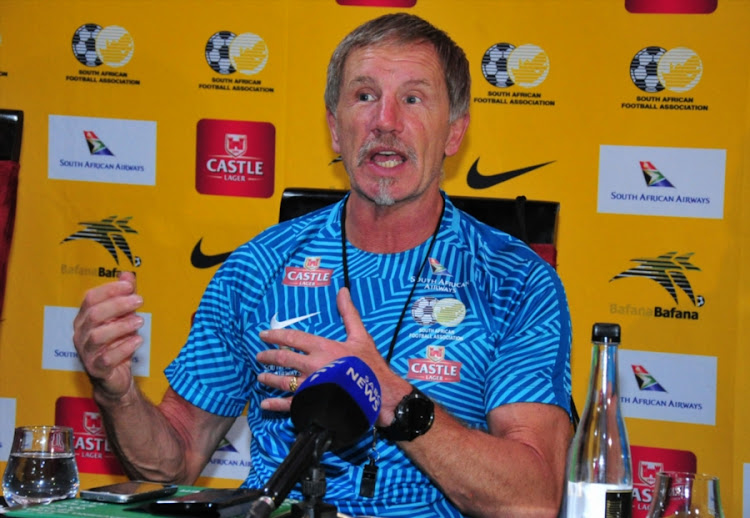 The last thing Bafana Bafana coach Stuart Baxter wanted to hear was that there are South Africans who do not believe his team can beat Senegal in a must-win 2018 World Cup qualifier at Peter Mokaba Stadium on Friday night.

When the question was put to the Briton here in Polokwane‚ he responded with a “wow” and appeared caught off guard.

“Wow! We are on camp and we are going to play two very‚ very important games and you are highlighting for me that there are people who have already written us off‚" Baxter retorted.

"Are they Zimbabweans‚ Congolese or are they South Africans?

"Maybe they are from Senegal‚ I don’t know.”

It’s win or bust match for Bafana as they have to beat the Senegalese in Polokwane to maintain hopes of boarding the flight to Russia next year.

Group D remains open and a win for Bafana would take the race for the sole qualifying berth down to the wire as the two countries face each other again in Dakar in what could be the decider next Tuesday.

A draw or loss for Bafana on Friday would put paid to their dream of qualifying for the global showpiece and Baxter expects the country to rally behind the team for the crucial tie in Limpopo.

“If they (the doubters) are South African‚ I would say get a grip of yourself for goodness’ sake.

“I’d say we have one game‚ 90 minutes and we want everybody behind us.

"We will try everything in our power to try to win that game and take Senegal right to the wire. We will try to do that and that’s 90 minutes.

“And if they can’t keep themselves positive for another 90 minutes‚ then I’m sorry‚” a disbelieving Baxter continued.

“I’m sure win‚ lose or draw‚ there are going to be negative and positive comments after the game.

"But leading up to the game I would like to think the message is not about what do I say to the ones that don’t believe in us.

"It would be what do you say to the ones that believe in us and that’s well placed‚ because we will give everything we’ve got‚” he added.

Senegal head the group with eight points from four matches‚ while Bafana are bottom with four points.

The visitors need two points from their last two matches against SA‚ but Baxter’s men must win both matches to qualify.

“Tyson”‚ who has returned to the squad after missing the 3-1 win against Burkina Faso last month due to injury‚ is not fazed by the fact that Bafana ...
Sport
4 years ago

Inspirational Bafana Bafana goalkeeper Itumeleng Khune will find out on Tuesday morning if he will be ruled fit to play in the crucial 2018 World Cup ...
Sport
4 years ago

SuperSport head into camp ahead of African Confederation Cup final

England used it at the 2010 World Cup‚ Bafana Bafana like to stay there regularly and now SuperSport United are decamping to the Royal Marang Hotel ...
Sport
4 years ago