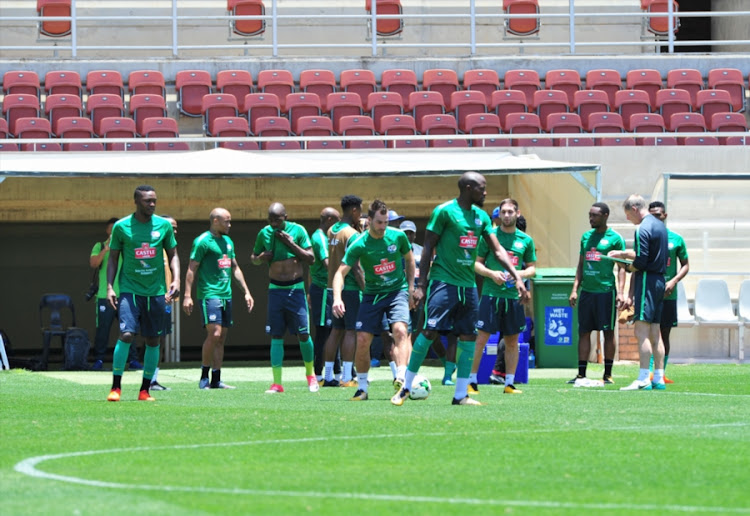 Bafana Bafana must beat Senegal home and away over the next week if they are to realise the dream of qualifying for the World Cup in Russia next year.

They have been in this position before and on occasions produced magnificent moments of triumph‚ and on others fallen short of their goal.

Here are six occasions when they went into must-win fixtures and how they fared.

Bafana Bafana were seeking to qualify for a first World Cup but were in a difficult qualification pool that also included Congo-Brazzaville‚ DR Congo and Zambia.

They went into their final qualifier against the former needing to avoid defeat to make it to France and claimed a 1-0 victory in front of 80‚000 fans to see them home.

It was a bullet from former striker Phil Masinga that sealed the deal‚ leaving coach Clive Barker to do his now famous aeroplane celebration as Bafana booked a World Cup berth.

It had become clear that Bafana’s only real concern in reaching the 2002 World Cup came from the challenge of Zimbabwe in their final round pool.

Defeat at home to the Warriors in their third-last qualifier would not have seem them eliminated‚ but would have put Zimbabwe’s in the pound seats with their destiny in their own hands.

Shaun Bartlett and Benni McCarthy settled the nerves with two first half goals‚ but Peter Ndlovu netted early in the second period to bring Zimbabwe back in the hunt.

Bafana held on for the win that did prove crucial in the end as Zimbabwe won their last two qualifiers. Defeat in this match would have set the Warriors to the World Cup instead.

The three-team qualifying group for the 2004 Nations Cup meant that any slip-ups would be amplified and it soon became clear that top spot was a two-horse race between Bafana and the Ivory Coast‚ with Burundi also-rans.

Key would be the penultimate qualifying tie for Bafana‚ and the final one for the Ivorians‚ that was played at the Old Peter Mokaba Stadium in Polokwane.

Bartlet gave Bafana the lead midway through the first half‚ before Bonaventure Kalou equalised for the visitors.

With the tie on a knife-edge‚ Bafana found a winner through Siyabonga Nomvethe and were able to seal their passage to the finals in Tunisia.

It was a good win against an Ivorian side that would go on to become a power on the continent with the likes of Didier Drogba‚ Arouna Dindane‚ Kolo Toure and Didier Zakora in the side.

In the end‚ Bafana did qualify for the 2008 Nations Cup‚ but only by a single goal scored and as a best runner-up after a dismal display in a much-hyped fixture against Zambia at Newlands in Cape Town.

They were demolished by a 24-minute first half hat-trick from Chipolopolo striker Chris Katongo as he ripped the Bafana defence to shreds.

Benni McCarthy scored in the second period but it was a humiliating home loss for Bafana.

They made the finals in Ghana by virtue of a +6 goal-difference in the pool phase‚ with closest rivals Uganda just behind them on +5.

Perhaps Bafana’s most famous failure and certainly their most humiliating as a misreading of the rules saw the players celebrate what they thought was qualification‚ only to be told shortly afterwards that Niger had pipped them at the post.

They thought they just needed a draw and played for one when ultimately a win was required.

It was a harrowing moment for then coach Pitso Mosimane‚ who never quite recovered with the national team and was sacked nine months later.

But he should not have carried the can alone‚ there were others within the technical team and broader management group who should have flagged the error.

Bafana went to Ethiopia knowing a victory would have put them into the pound seats for qualification for the last stage of the preliminaries for the 2014 World Cup.

In the end a draw would have been enough as things turned out‚ but the day ended in defeat as Bernard Parker was both hero and villain.

Bafana then missed a host of chances and Parker put the ball in his own net to hand Ethiopia the win when a draw would have ultimately seen them advance to the next stage.

Hunt on Egyptian Gamal: He’s come in here and there’s one man and a dog

The Caledonian and Refilwe Stadiums in the heart of Pretoria will receive multi-million rand makeovers after the City of Tshwane allocated over R100 ...
Sport
4 years ago

South African Football Association (Safa) officials are confident that they will have sold 30,000 tickets by Thursday ahead of Bafana Bafana’s 2018 ...
Sport
4 years ago