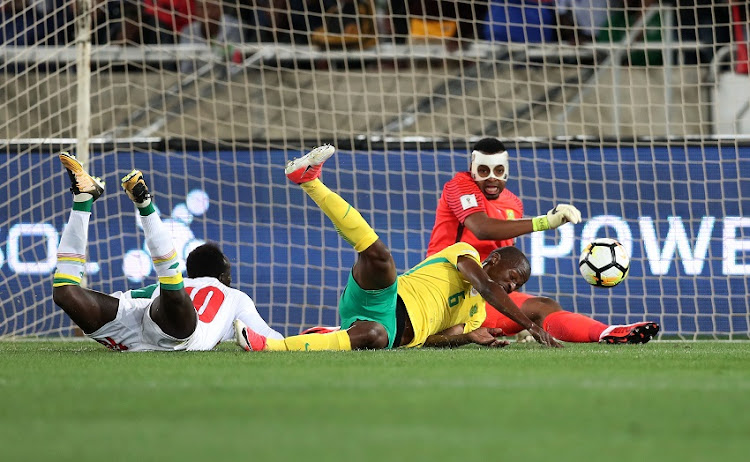 Bafana Bafana’s 2018 World Cup dream has gone up in smoke after they lost 2-0 to Senegal at Peter Mokaba Stadium on Frday night.

First half goals by Diafra Sakho and an own goal by Thamsanqa Mkhize put paid to South Africa’s hopes of a fourth World Cup appearance, while the West Africans ensured they win Group D and subsequent qualification to the global showpiece with the win.

This was just a culmination of a chaotic week for Bafana.

Bafana arrived in Polokwane without their European-based players who were delayed in flying in and then came the revelation that influential playmaker Thulani Serero wasn’t coming after all because he wasn’t guaranteed a run.

There were some positives, though, prior to the clash with goalkeeper Itumeleng Khune declared fit to play after a face mask was secured for him so he got the nod to start, which would have pleased the nation.

But even with Khune, it was always going to be a big ask for Bafana who needed to beat the Lions of Teranga home and away to qualify.

The 40 000 strong crowd was silenced just 11 minutes in with Sakho running on to a through ball from Sadio Mane to fire home for the opener.

Bafana picked themselves up and took the game to the visitors, but were let down by poor finishing.

Themba Zwane had a chance in the 25th minute, but fired straight at goalkeeper Khadim Ndiaye and Percy Tau failed to convert from the rebound.

Lebogang Manyama had an even better chance minutes later, but watched in disbelief as his shot hit the crossbar and back into play, much to the fans’ disappointment.

It went from bad to worse for the hosts when Senegal got their second in the 38th minute when the ball deflected off Mkhize and into his own net.

Senegal were back in the driving seat and by halftime, Bafana were kept at bay by one of Africa’s top sides.

The second half saw the hosts try to take the game to the West Africans, but it was always going to be difficult against a side comfortable to sit back and protect their lead.

Sibusiso Vilakazi had a chance to reduce the deficit just before the hour mark with a low shot from close range, but goalkeeper Ndiaye made an easy save.

From there, Senegal continued to keep it tight and Bafana, in turn, just couldn’t break down the defence.

In the end, this was just not meant to be for Bafana. The two countries will meet again in Dakar on Tuesday, but that will be a dead rubber.