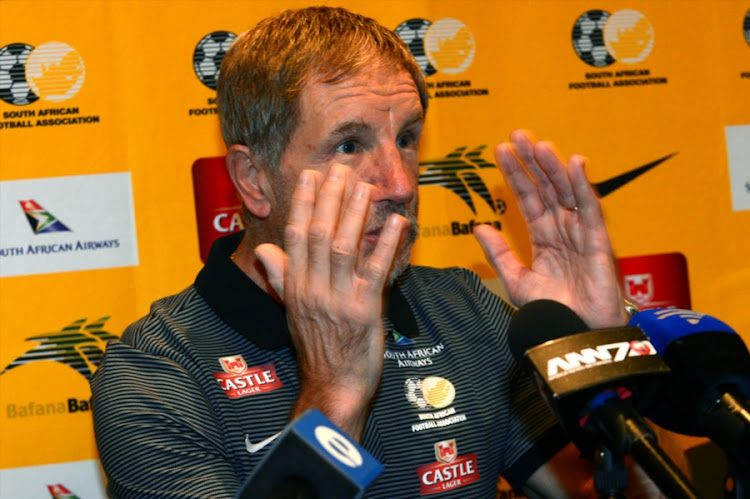 Bafana Bafana paid for not being able to get onto the front foot early in their 2-0 defeat against Senegal on Friday night that ended their chances of being at next year’s World Cup in Russia‚ said Stuart Baxter.

The Bafana coach said it was the South Africans’ failure to get on the front foot early and dominate Senegal in the opening exchanges of the Group D qualifier at Peter Mokaba Stadium that led to Diafra Sakho’s 12th-minute opener for the Lions of Teranga.

“I thought the first 10 minutes was everything that we didn’t want‚” Baxter said.

“We wanted to be on the front foot‚ we wanted to show them scant respect. We wanted to tell them that‚ ‘We know you’ve got famous players but we don’t fear you – we want to get at you’.

“And unfortunately when we go out we are very negative. We don’t feed balls into our front players quickly enough‚ we don’t have a good attitude to play forward when we have a chance.

Bafana Bafana coach Stuart Baxter says South African football still has a long way to go because there has not been a change in mentality and work ...
Sport
4 years ago

“The ball goes backwards and sideways‚ and then long into Lebo [Lebogang Manyama] making runs down the channels. Which was exactly the oppositie of what we wanted.

“And then we go a goal down‚ and then immediately‚ from let’s say that point until the 40th minute‚ I was very‚ very pleased with the way we played.

“I thought that was the best football we’ve played since I’ve taken over. And to go in 2-0 down at half time – to say it was unfair I think is an understatement.

“We brought on Andile Jali to try and break the lines even more‚ because they were playing deep and Lebo wasn’t getting into the game very much.

“And we brought on ‘Shabba’ [Siphiwe Tshabalala] thinking that if we got a set play maybe he could deliver a ball for us‚ because we were playing in their half.

Bafana Bafana’s 2018 World Cup dream has gone up in smoke after they lost 2-0 to Senegal at Peter Mokaba Stadium on Frday night. First half goals by ...
Sport
4 years ago

“But they have a two-goal cushion now‚ and they’re smashing things long and hoping that one of their Premier League players can get on the end of it and do something special.

“So at the final whistle it’s 2-0 and you think‚ ‘Well‚ I hate the result‚ but the performance I don’t think is far from a performance that knocked them over’.

“Take a few of our chances‚ and a bit of bad luck we had with their goals‚ and I think we’re not far away.”

Senegal have an unassailable 11 points in Group D to qualify for Russia 2018 going into the now meaningless return match against Bafana in Dakar on Tuesday night.