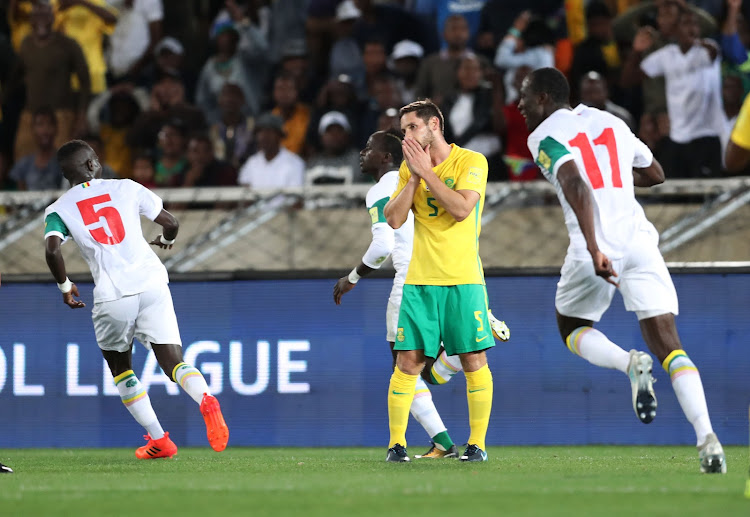 Defender Kara Mbodji headed in with the final touch of the game to confirm Senegal's place at the 2018 World Cup with a 2-1 win over Bafana Bafana in Dakar on Tuesday night, appeals or no appeals.

A 56th-minute strike by Opa Nguette put Senegal ahead at Stade Leopold Senghor before Themba Zwane missed a penalty for the South Africans. The the industrious Percy Tau equalised in the 65th.

But Mbodji scored the winner on a big night for Senegalese football in the 93rd.

Now even an appeals process by Burkina Faso at the Court of Arbitration for Sport (Cas) over the win annulled by Fifa by Bafana over Senegal in Polokwane last year cannot help South Africa, or Burkina, qualify.

Neither Senegal nor South Africa on Tuesday night at the packed, though subdued 60 000-seater stadium, played as if that appeal might have an impact.

Burkina Faso, though, in Ouagadougou, did, pressing for the heavy goals win they needed against Cape Verde to reel in a goal difference from their 0 to Senegal's +6.

Burkina won 4-0, which was not enough to catch Senegal even if that appeal had gone the Burkinabe's way. And the Lions of Teranga's win also meant that appeal would have no effect on points.

The game in Dakar was delayed for about seven minutes after the stadium lights cut out just after the anthems and moments before kickoff.

Bafana coach Stuart Baxter made two changes from the team who lost 2-0 against the Lions of Teranga in Polokwane on Friday night in the decisive game of Group D that saw Senegal qualify and Bafana out.

Bongani Zungu came back from suspension into central midfield for Kamohelo Mokotjo, and Keagan Dolly replaced Lebogang Manyama in the frontline.

Itumeleng Khune started in goal again, but this time without the protective facemask.

The first half was played by two teams who looked like they were running through water. If anything the South Africans were in the ascendancy, certainly dominating territory.

But in a game where neither side had anything to play for - and even the Burkina appeal must have seemed too distant a prospect to be considered a factor - chances were few to come by.

Morgan Gould volleyed over from 12 metres in the 10th minute for South Africa.

Bafana had the best chance of the half when, in the 37th, Percy Tau expertly chested Thamsanqa Mkhize's cross into the path of Sibusiso Vilakazi, who shot straight at goalkeeper Alfred Gomis.

As the second half began even flatter than the first, the Lions took the lead. Khune had to take some of the blame.

The Bafana goalkeeper came far out of his area for a speculative ball forward by Senegal, then was caught in no-man's land as Moussa Sow teed up Nguette, who could easily chip into an unguarded goal from 30 metres.

Bafana continued to try to be the part-poopers. Tau could not be faulted for effort. He put Zwane through to be fouled in the area, the referee pointing to the spot. Zwane, though, slipped his spotkick weakly wide of the left upright.

Then the South Africans got the goal they deserved. Khune's fine distributing ball found Keagan Dolly, who could lay a pass to Tau, who finished low past Gomis.

But Mbodji's powerful header from a Moussa Wague corner earned Senegal the win.