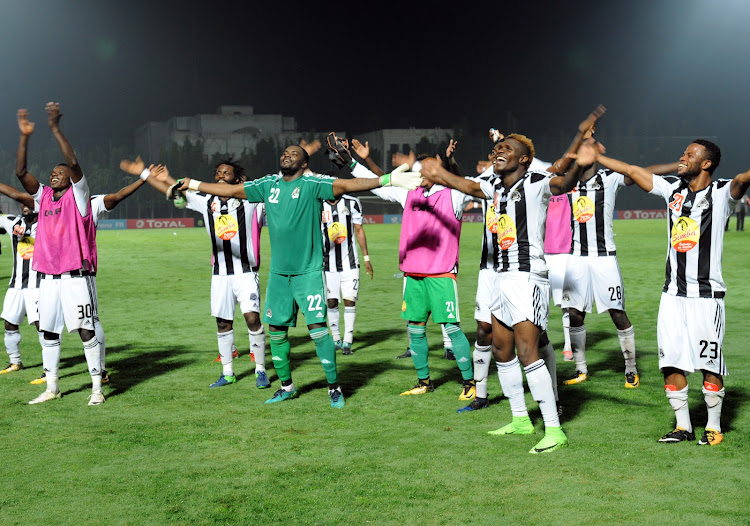 TP Mazembe's the players celebrate the final qualificationl during the semi-final of the 2017 Confederations Cup match between FATH Union Sport and TP Mazembe in Rabat on 21 October 2017.
Image: BackpagePix

The Stade TP Mazembe is “not the bull-fighting ring that it used to be”‚ former Orlando Pirates coach Roger de Sa has said about friend and SuperSport United coach Eric Tinkler’s trip there this weekend for the Caf Confederation Cup final.

SuperSport meet Democratic Republic of Congo giants Tout Puissant Mazembe at their feared home stadium in Lubumbashi in the first leg of the final on Sunday.

De Sa and Tinkler know the venue well having survived a famous 2013 Caf Champions League second round match there when the former was coach of that year’s finalists Pirates‚ and the latter his assistant.

“I don’t think it’s as bad anymore. I think they’ve been found out a bit‚” De Sa said.

“I don’t think they can do their little shenanigans like they used to.

"I think especially after our [Pirates’] trip there. I think the alarm bells came up and then everybody started scrutinising them a bit more.

“They have lost a few games at home. SuperSport were there earlier in the year as well and they drew. So it has changed. It’s not the same bull-fighting ring that it used to be.

“And I think also the fact that it’s a final‚ it’s broadcast all over the world‚ and a lot of people will be watching means they can’t mess around – there’s no more a red card and two penalties for nothing like we got.

“I think the Astroturf is still a difficult surface to play on.

"That’s why Eric has brought SuperSport here to prepare with us in Rustenburg‚ where the heat is also good preparation.”

SuperSport have been training for the final on an artificial surface at Stars’ home facility at Royal Marang Hotel.

Interestingly‚ while Mazembe (12 points) finished above SuperSport (10 points) in Group D‚ SuperSport drew 2-2 in Lubumbashi and 0-0 at home against the DRC team.

Those scores‚ in a two-legged tie‚ would have been enough for an aggregate away goals victory to the South Africans.

“Also the fact that SuperSport are playing away first is a big advantage for them. So‚ in my opinion‚ I think SuperSport are favourites this time‚” De Sa said.

“And also the president of the club has been away‚ and Mazembe have lost a bit of poison.”

Mazembe’s billionaire chairman Moise Katumbi‚ the former governor of DRC’s Katanga province and the leader of the opposition to the country’s president‚ Joseph Kabila‚ has lived in self-imposed exile since May 2016.

“I didn’t find the crowd that hostile – they were really just supportive of their team‚” De Sa continued.

“I can tell you that Pirates got a standing ovation when we finished our match there.

“There were fireworks afterwards [outside the stadium].

"A few cars were burnt‚ we had to change our route to the airport‚ and then we had to sit on the tarmac for three hours waiting for our passports.

"But we got out of there to tell the story.

“But I don’t think it’s like that any longer.

"Do they have a good team? Yes. They still bring in big-name players from Zambia and their neighbouring countries.

“They still are a formidable force – there’s no doubt about that.”

The second leg will be played at Lucas Moripe Stadium in Atteridegville on Saturday‚ November 25.