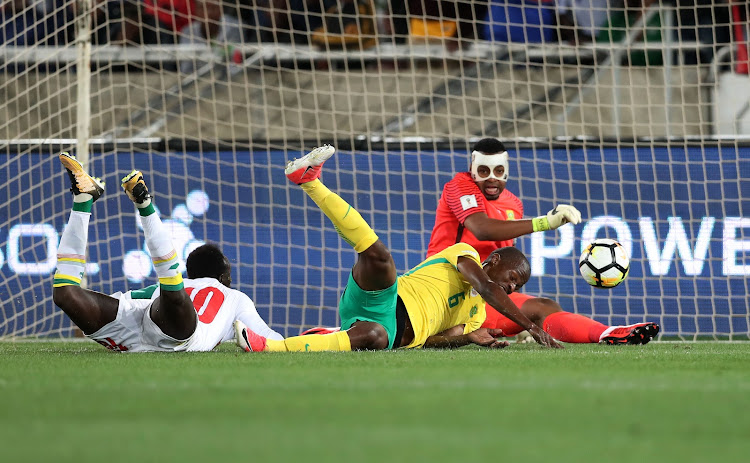 Kaizer Chiefs will wait for the Bafana Bafana medical team to return from Senegal later this week and explain the reasons behind the decision to play goalkeeper Itumeleng Khune with a protective mask in a 2018 World Cup qualifier against the West Africans in Polokwane last week.

An injured Khune emerged from the 2-0 defeat to the Senegalese at the Peter Mokaba Stadium on Friday unscathed and the goalkeeper is part of the Bafana team that travelled to Dakar to play the second game against the same opposition on Tuesday night.

Chiefs have observed developments from a distance and the club's football manager Bobby Motaung said on Tuesday they would wait for the Bafana medical team to submit a report detailing events over the past few days.

“They (Bafana Bafana medical team) will give us a detailed report at the conclusion of the camp to explain to us how they used him‚" Motaing said.

"He (Khune) should have played after the necessary medical clearance but we will go through the report and take it from there.”

The injury threw his participation in the World Cup qualifier against Senegal into serious doubt and he eventually faced the Senegalese donning a protective mask that set tongues wagging.

Bafana return from Senegal on Thursday and if he is injury free‚ Khune is likely to start for Chiefs in the Telkom Knockout semifinal against unpredictable Bidvest Wits in Johannesburg on Saturday afternoon.

After the Telkom Knockout‚ Premier Soccer League action resumes and all the teams will be faced with a heavy schedule of seven rounds of matches before the Christmas break on December 20.

“We have prepared for the heavy league schedule that is upon us from next week when we travel to AmaZulu at King Zwelithini Stadium‚” said Motaung.

Manchester City have opened up an eight-point gap at the top of the Premier League, scoring 38 goals along the way, but while some are predicting an ...
Sport
3 years ago