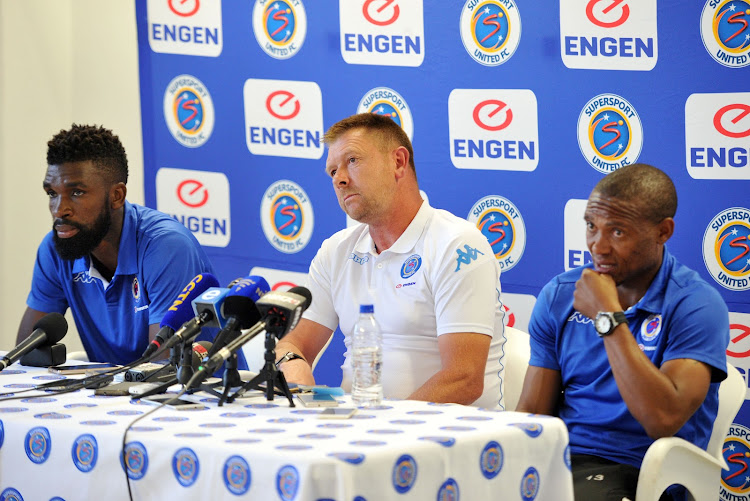 SuperSport United coach Eric Tinkler has urged his charges to go to the intimidating cauldron that is the Stade TP Mazembe in Lubumbashi and snatch a crucial away goal in their first leg Caf Confederation Cup final against Congolese side TP Mazembe on Sunday.

United depart for the DRC on Friday morning and Tinkler said an away goal would give them an advantage in the return leg at the Lucas Moripe Stadium in Atteridgeville next week.

“An away goal is a priority for us‚ otherwise it means nothing‚" he said.

"For me‚ you need to try and take advantage by going there and scoring irrespective of whether it is 1-1‚ a 2-1 loss or even better‚ we have won 2-1.

"But 0-0 would not be the greatest score for us because it puts you on the back foot.

"If it is 0-0 and they come here and score one‚ then you must score two.

“It is different when you play like they did against Zesco United.

"We need to go out there and score because we can’t afford to go there and not score.”

United have just returned from a three-day camp in Rustenburg where they trained on an artificial pitch.

The South Africans will encounter a similar surface in the DRC when they face the Congolese.

“It would have been beneficial training on the artificial pitch in Rustenburg with all the players available but we felt that it was important to go there because we needed the depth in the squad.

"Someone in the team‚ somewhere‚ is going to have an opportunity. A guy like Prince Dube is travelling with us and this is his first trip.”

Tinkler said it would be a massive boost for the name of the club on the continent should United go all the way and win the tournament against all odds.

“It will be massive‚ we will put the name of the club on the continent which is what I don’t think is the case at the moment.

"I don’t think that Mazembe took SuperSport seriously when we played them in the earlier round.

"I promise you now that they know who SuperSport is.

“On a personal level‚ this is something that I would like to have on my CV.

"My objective as a coach is not only to win things in South Africa but also on the continent.

"I have been to two finals in this competition in the past and if I fail three times I will still go back.

"That is how ambitious I am.”

Mato Madlala will continue as acting CEO of the Premier Soccer League (PSL) because a suitable candidate who has been found is tied up until ...
Sport
3 years ago

A request from the SA Broadcasting Corporation (SABC) has forced the Premier Soccer League (PSL) to extend the tender process for the media rights in ...
Sport
3 years ago

Senegal’s coach Aliou Cisse had a veiled dig at his detractors after success in the last World Cup qualifier against South Africa‚ saying he had ...
Sport
3 years ago

Kaizer Chiefs coach Steve Komphela has said that a first career trophy in the form of the Telkom Knockout will be part of a “process” that he will ...
Sport
3 years ago
Next Article