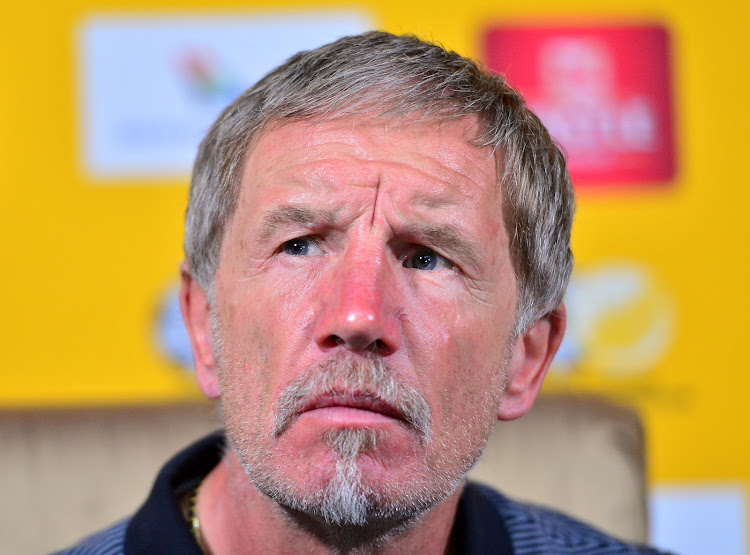 Kaizer Chiefs coach Steve Komphela has slammed South Africans and the impatience and inability to follow through on plans to resurrect football in the country.

In the wake of Bafana Bafana’s failure to qualify for yet another World Cup after their defeats of the past week in their qualifiers against Senegal‚ Komphela said fingers cannot be pointed at one man‚ South Africa coach Stuart Baxter.

“It’s sad‚ but there’s nothing that we can do.

"And we can’t blame anybody but ourselves‚” Komphela‚ a former South Africa Under-23 and Bafana assistant-coach to Baxter in the Briton’s previous stint in 2004 and 2005‚ said.

“I strongly believe you can’t point a finger at one person.

"And my take on it is not going to be technical or tactical‚ or whatever.

"It’s just pure planning. And conviction to the plan.

“I don’t know whether we are aware‚ as a society‚ that football is a reflection of how we think and how we go about business.

“Are we patient enough as a nation‚ in anything?

"You sit down‚ you think. After thinking you draw a plan. After planning you prepare. After preparation you start participating.

“And in-between‚ up until you start participating‚ there are going to be some setbacks and shortfalls. You review‚ reflect and consolidate.

"Move on. Then do it again‚ up until you reach your final destination.

“But we South Africans are different. Our thinking is that: bring a plan‚ let’s make it a four or five-year plan‚ or 10.

"The first six months in‚ you immediately think‚ ‘No‚ no‚ I must have achieved my objections’.

“Very impatient. I think it’s high time that we stopped looking at Bafana Bafana but address ourselves as a nation‚ as a society. How much patience we have in everything.

“Whether you go religious‚ political‚ even in economics. ‘I want to get rich now‚ I don’t care.’ And in the process of my wanting to get rich now‚ there’s a whole lot of souls that I trample on.

“There are no values. So we need to create a system that respects planning. And planning comes at the back of serious thinking.”

Komphela said it was the lack of follow-through on plans to resurrect SA football – such as former Bafana coach Carlos Queiroz’s document he made in 2002‚ and Safa’s technical master plan – that has crippled the sport in the country.

“We’ve had too many meetings where we were thinking. We’ve had so many plans. Carlos Queiroz had a plan in 2002. And you and I are quick to say that it’s gathering dust at Safa.

“But somebody has to go there‚ pick up that plan‚ put it into action. You can have a hell of a great document.

“But it must be brought to life. We are not prepared to bring stuff to life.

“We don’t have the courage to face pressure. Because when you are building something there's going to be a whole lot of pressure.”

With SA football stuck in Groundhog Day for 15 years since their last qualification for a World Cup in 2002‚ Komphela’s advice does appear to need listening to.

Kaizer Chiefs coach Steve Komphela has stumbled across his winning formula‚ Bidvest Wits counterpart Gavin Hunt has said‚ admitting that his own team ...
Sport
3 years ago

Bafana Bafana’s failure to qualify for the Fifa World Cup in Russia next year will not derail the South African Football Association's (Safa) Vision ...
Sport
3 years ago

Bloemfontein Celtic midfielder Lantshene Phalane has credited their impressive start to the season to a unity among the players that was largely ...
Sport
3 years ago
Next Article