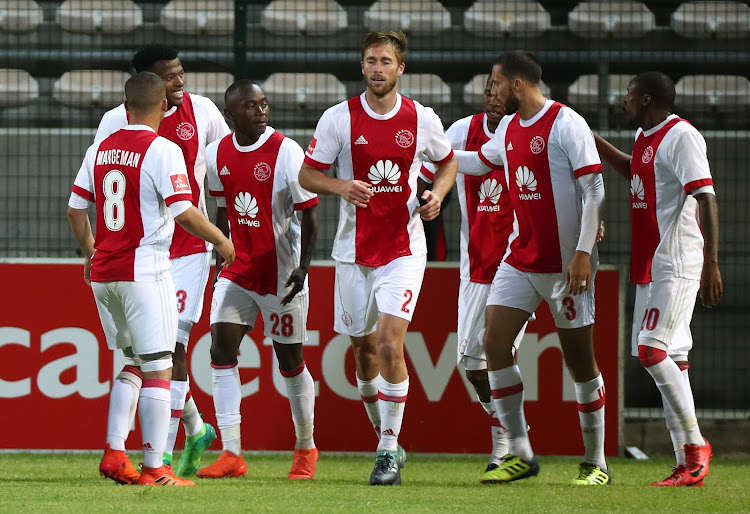 Mario Booysen has urged his Ajax Cape Town teammates to cut out the soft goals as the Urban Warriors travel to Nelspruit to meet SuperSport United for their catch-up Absa Premiership fixture on Wednesday.

Ajax let in two goals in injury-time of their 2-2 draw with AmaZulu on Saturday‚ a match in which they should have been out of sight going into the final stages after a number of missed opportunities.

Only fellow strugglers Bidvest Wits‚ AmaZulu and Polokwane City have let in more goals than Ajax this season‚ who looked more effective going forward‚ but their soft centre at the back remains.

Booysen was playing for SuperSport as recently as last season and knows all about their potential in attack.

“If you look at it overall‚ it is not goals [conceded] that other teams have had to work for‚ it’s soft goals‚” Booysen said of his side.

“But the team is gelling together nicely now. On Saturday we were the better team without a doubt‚ but we are still conceding [soft] goals.

“Definitely we are on the right track‚ if you look at the performances overall I think the team is doing well.

"It is a lack of concentration from everyone‚ that is one of the small things we have to sort out.

"The things we are meant to be doing‚ we are doing well‚ but the other small things‚ like communicating‚ organising‚ if we can get that right it will help us grow into a better team.”

Booysen believes his side will be better on Wednesday having now got a game under their belt after a three week break.

“Coming from a three-week break‚ it is not easy to get the engines running again‚ you do feel a bit rusty‚” he said.

Booysen believes that there will be a lot of disappointment in the SuperSport ranks after their loss to TP Mazembe in the African Confederation Cup final‚ but says they will now also be more motivated to start climbing the Premiership table.

“With SuperSport‚ they will be switching focus to the league‚ but they will still be hurting. In football you never like to lose in the final‚” he said.

“I think they will come out and try to put things right against us‚ especially as they are behind in the league so they will now want to get as high up as they can on the table.

“They are an experienced squad and they are good players‚ we respect that‚ but we should also worry about ourselves and we should put effort into doing what we can do and what we can control.

“We have to take advantage‚ stick to our game plan‚ but it will also come down to our attitude‚ we need to apply ourselves in a professional manner. We must go for it.”

Ajax have just a single away win in close to a year‚ at Chippa United in May‚ but Booysen says they will not let that play on their minds too much.

“We don’t have a good [away] record‚ but the thing about football is that you always get the opportunity to change things‚ to put things right.

"So we will go there and play to our game-plan and what we know‚ and obviously go for the win.”

Ajax are currently third-bottom of the Premiership‚ level on points with Wits and Platinum Stars below them‚ but with a superior goal-difference.

They also have a game in hand on the former and two on the latter‚ giving them an opportunity to move clear.

Victory would move them up to 11th place in the table.

South African club officials are angry at the lack of clarity over next year's continental club competitions.
Sport
3 years ago

Bloemfontein Celtic are planning to keep to their usual routine and will continue working at home this week ahead of their cup final trip to Durban‚ ...
Sport
3 years ago

AC Milan sacked coach Vincenzo Montella on Monday and immediately announced that he would be replaced by their fiery former midfielder Gennaro ...
Sport
3 years ago
Next Article