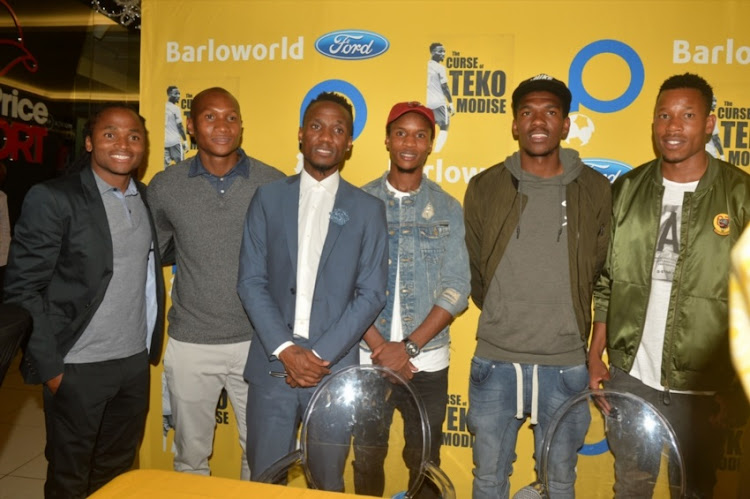 Siphiwe Tshabalala, Jackson Mabokgwane, Themba Zwane and Happy Jele pose with Teko Modise during the Launch of the book, The Curse of Teko Modise at Exclusive Books, Mall of Rosebank on November 29, 2017 in Johannesburg.
Image: Lefty Shivambu/Gallo Images

A new book on the life of Teko Modise gives rare insight into the muti rituals performed at Orlando Pirates.

The biography‚ The Curse of Teko Modise‚ details midnight baths on the eve of games that it is asserted Modise and his teammates took part in when the former Bafana Bafana playmaker played for Pirates between 2007 and 2011.

“There was a lot to get used to at Orlando Pirates. One of the most interesting things was the role of muti‚” the book asserts.

“… When Teko arrived at Pirates he met their resident sangoma.

"In Teko’s first week‚ the sangoma said he was going to try something new.

"In the change room before the game‚ the sangoma placed a stick at the entrance.

"All the players had to jump back and forth over the stick.”

When new rituals would not work “the sangoma would revert to the classic ritual – the bath.

How Teko Modise was relentlessly pursued by a stalker

A new book on Teko Modise alleges he was stalked by a cult-like secret society then gave R50 000 to a “Congo king” sangoma at his lowest ebb when he ...
Sport
3 years ago

The players would be woken up at midnight before a game and made to bath in water mixed with a specially prepared concoction of herbs and other ingredients.

“Many players were religious and these practices made them uncomfortable.

"However‚ at Orlando Pirates everything is performed as a team. Religious or not‚ you get in the bath.

“The players would bath in a special mixture‚ then shower‚ climb back into bed and try to sleep before the game.

“Even with this practice the results were not improving. [The Sangoma] determined that the players were not using the muti correctly.

"He realised that they were showering after their bath and therefore the muti was washed off‚ so he devised a new plan.

“Now‚ instead of the players bathing at midnight‚ before the game they would grab their bags‚ go bath … then get on the bus to the stadium.

“‘The water was very black‚’ Teko recalls. ‘You have no idea what is in there. You could see some sticks and leaves but who knows what else was in there. It would be very itchy‚ very strange’.

“The biggest problem was when they had to play at night.

"As they could not dry off their jerseys would be damp‚ their socks would be damp and they would become very cold and uncomfortable.”

The Curse of Teko Modise‚ written by Nikolaos Kirkinis‚ is published by Jacana Media.