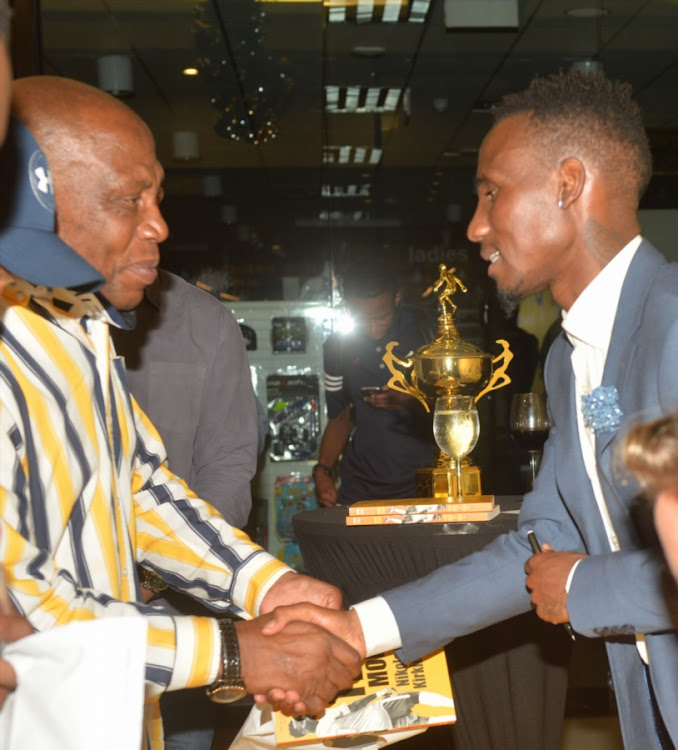 Teko Modise sign his book to former Bafana Bafana coach Shakes Mashaba during the Launch of the book, The Curse of Teko Modise at Exclusive Books, Mall of Rosebank on November 29, 2017 in Johannesburg, South Africa.
Image: Lefty Shivambu/Gallo Images

Modise made several explosive revelations about his relationship with Mosimane‚ including that they were not on speaking terms in the final two years of his successful career at Sundowns.

Mosimane had declined to comment on the book since it was launched last month but finally offered his view this week‚ even though he did not reveal much.

“I don’t want to talk about Teko (Modise)‚ let’s give him a break‚" Mosimane said.

"He knows the contribution I made to his career and he knows that.

"I want things to remain like that‚ let Teko be on a honeymoon and let’s leave it like that.

Pressed to respond on whether he would make contact with Modise‚ Mosimane declined to give a direct answer but said he never chased the Cape Town City player away from Sundowns.

“I want us to remain the way I was when I got him from City Pillars.

"He is a legend and I appreciate all the work he has done when I was a coach.

"He has done well for the club and let’s leave it like that.”

Mosimane and Modise worked together at SuperSport United‚ Bafana Bafana and Sundowns and they won the two league titles‚ the Telkom Knockout‚ Nedbank Cup‚ Caf Champions League and the Caf Super Cup with the Brazilians.

There's much to be written about in South African football

Growing up, recalled a colleague, there were a few books he used to see when going into people's houses.
Sport
4 years ago

Teko Modise has revealed he blew R22 000 a month on an Aston Martin DB9 he bought and used to drive to training‚ and which caused only problems for ...
Sport
4 years ago

A new book on the life of Teko Modise gives rare insight into the muti rituals performed at Orlando Pirates.
Sport
4 years ago