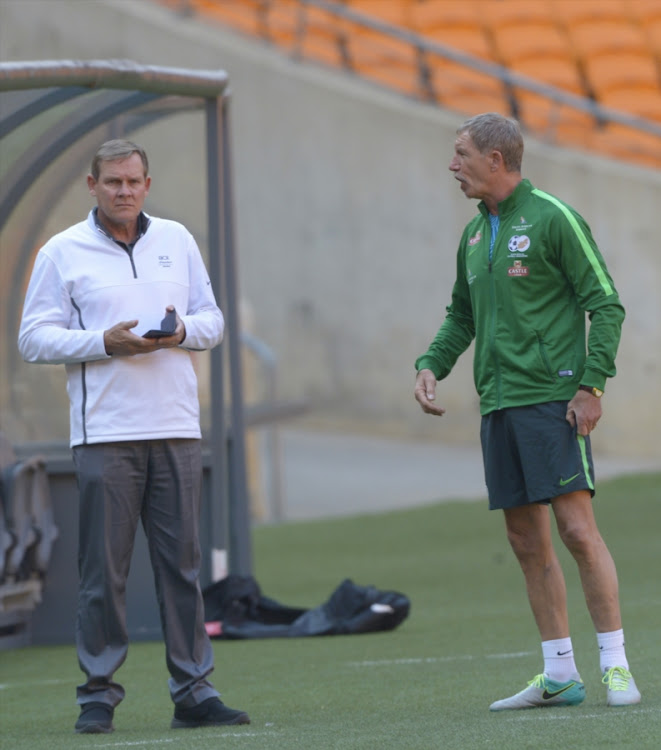 If you thought Bafana Bafana coach Stuart Baxter was going to be hauled over the coals after his team's failure to qualify for 2018 Fifa World Cup in Russia‚ then think again.

“Not at one moment‚ no‚” said an agitated Tovey.

Asked why Baxter's future was not discussed after Bafana failed to qualify for a second World Cup in a row‚ Tovey echoed the beleaguered Bafana coach and said it was never the Briton's mandate to get the team to Russia.

“That wasn’t his mandate (to take Bafana to Russia)… he’s only been in this job for seven months‚" Tovey said.

"Should we keep replacing the coach?

"You’re (media) the same people that were criticizing Safa on how many coaches we’ve had for so many years.

“We selected him (Baxter) for a reason.

"Sometimes we have to look at players.

"He (Baxter) doesn’t kick the ball. It doesn’t mean the strategies were wrong.

"You can’t go beat Nigeria in Nigeria and suddenly become a bad team.

“You’ve got to look at the players. The players have to wake up and look at themselves. Are they giving enough?”

Tovey said he was still very much confident of Baxter’s ability to take Bafana forward.

"I see how he works and going forward I’ve confidence in him.

"It’s about the application of the players. The players have to bloody wake up.

"And I’m being honest here. They’ve got to ask themselves if they’re doing enough.

"They really have to get a big awakening because they’ve got so much potential. But they need to get their heads right and need to wake up.”

About the team not qualifying for the World Cup‚ what was the technical committee’s feeling?

“We are obviously not happy or the country happy about not qualifying and he’s not happy as a coach about us not going to the World Cup‚" he said.

"But that was never a question on whether he’s going to stay or not.

“Our meeting was all about what were the pitfalls? What went wrong? How can we correct them?

"There were a whole lot of things‚ mainly touching on how we going to develop the players and make them ready to play for Bafana.”

Baxter praised his team’s dominance of matches they didn’t win a few weeks ago and Tovey sang from the same hymn book.

“I think the national team mainly let themselves down in big match moments‚" the Safa Technical Director said.

"I mean everybody saw that we dominated against Senegal and we are a better team than Senegal‚ but we didn’t qualify.

"So where did we go wrong? You have to look at the mentality of the players. Have we got the right players?”

Tovey added that they did touch on Baxter’s selection and how he’s got to think about it in the coming eight months in which Bafana will not have a competitive match until September 7.

“He must keep the solid foundation and discard those he thinks failed to do the job for him in the qualifiers.

"I can’t talk names because I’m not talking from a coach’s perspective.”

South African Football Association (Safa) president Danny Jordaan says they were stunned by the backlash they received from the public and the media ...
Sport
4 years ago

Bafana Bafana may have failed to qualify for next year’s Soccer World Cup but beleaguered coach Stuart Baxter and his players will not be twiddling ...
Sport
4 years ago

What do you do with an eight-month long break from competitive international football?
Sport
4 years ago

The South African Football Association (Safa) has managed to claw its way out of a R45-million deficit and is expected to report a healthy ...
Sport
4 years ago