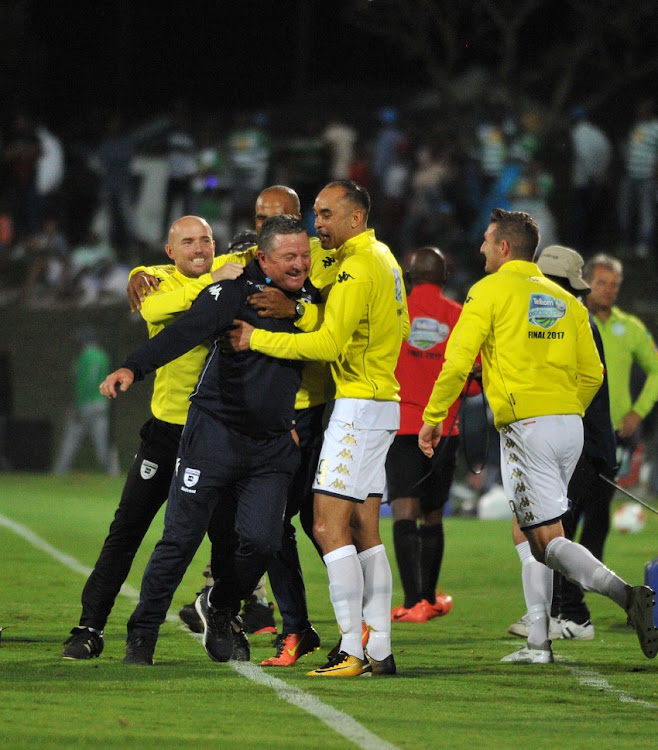 Bidvest Wits host Ajax Cape Town in an unlikely battle at the basement of the Absa Premiership on Wednesday night and with the chance to move off the foot of the table.

League champions Wits‚ who on Saturday claimed the Telkom Knockout trophy by beating Bloemfontein Celtic in the final‚ find themselves at the bottom of the league‚ but with improving form will surely start climbing the table.

They can start that against renowned poor travellers Ajax‚ who have also looked improved in recent weeks without getting wins under their belt.

With four clean-sheets in their last five games‚ Wits are at least becoming difficult to beat again‚ as they come up against an Ajax side with just three away victories in their last 28 games in all competitions.

It has taken Ajax coach Stanley Menzo to the brink at Ikamva‚ and two more poor results this week in this game‚ and when they ‘host’ Chippa United at the same venue on Saturday‚ could seal his fate.

He is likely to have goalkeeper Brandon Peterson back to bolster his chances‚ but admits that meeting Wits now‚ so soon after they won the cup‚ will be a challenge.

He has called on his players to “deal’ with the challenges in front of them‚ essentially a call to ‘man up’ in the face of adversity.

“All those things‚ when you are in a situation where things don’t fall your way‚ it’s always like that. Their [Wits’] whole back four is back‚" Menzo said.

"We just have to think about ourselves‚ they are a team that has been given a boost because they won the final.

"But we have to just deal with that.

“That is the objective‚ game-by-game‚ the upcoming three and then hopefully we have some more points and then we have the break to think about the next step.”

He admits his players are under pressure and says that given the league position of the club‚ they should be.

“I hope they feel pressure because it’s there‚ that is a normal thing in football. But they have to deal with it‚ for me as a coach it is try to keep the pressure as low as possible.

Menzo has also called on his side to be more resolute away from home and points to two notable successes last season.

“Last season we won at both Celtic and Platinum Stars away … of course it is easier to play at home‚ you have the advantage of the fans and the fact it is your own field‚ but still the field is the same for both sides.

“Let’s try to deal with those things‚ we have to play away‚ so let’s just go and play.”

Wits coach Gavin Hunt is relieved to have a number of injured stars back and believes they can still go from the bottom of the league to retaining their title.

They go into Wednesday’s game 10 points behind leaders Mamelodi Sundowns and having played a game more.

These‚ therefore‚ are the kinds of matches they simply have to win.

“Listen‚ if you look at the league table this year‚ the team at the top doesn’t even have two points a game‚” he told reporters on Saturday.

“So I don’t think anybody’s going to get over 60 points. SuperSport can‚ and Sundowns can‚ because they’re both in good positions in the league‚ and they’ve got the squads.

“The rest of us‚ we’ve got to try and play catch-up. I think it’s important for us to try and take everything into consideration‚ and take stock.

“The team’s got good togetherness and determination. And that’s always the first thing that worries you when you’re bottom of the league.

“Togetherness and want and will‚ and all those throwaway words. But‚ I mean‚ we’re together‚ we’re fine.”

South African Football Association (Safa) president Danny Jordaan says they were stunned by the backlash they received from the public and the media ...
Sport
4 years ago

South Africa’s build-up to the 2019 FIFA Under-20 World Cup and 2020 Olympic Games begins this week at the start of the COSAFA Under-20 Championships ...
Sport
4 years ago