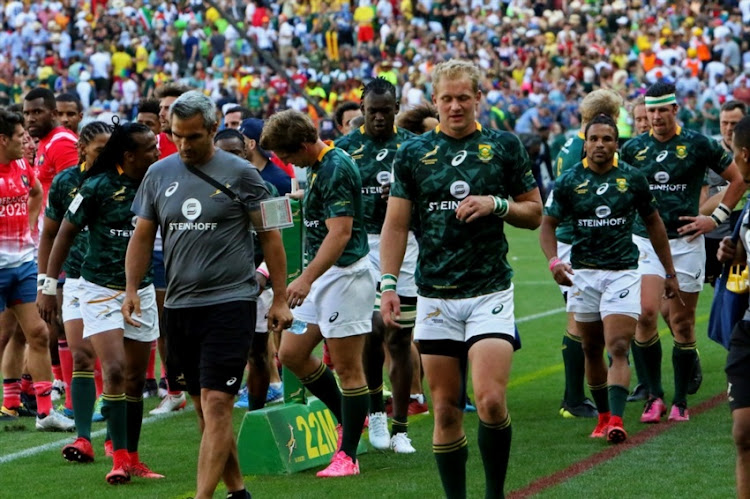 South African players during the match between South Africa and Russia on day 1 of the 2017 HSBC Cape Town Sevens at Cape Town Stadium on December 09, 2017 in Cape Town.
Image: Dereck Green/Gallo Images

The Blitzboks staged a remarkable fightback to beat Fiji 31-26 in a thrilling quarterfinal of the Cape Town Sevens on Sunday after trailing 21-5 at one stage in the match.

Star wing Seabelo Senatla was both villain and hero‚ in what was the game of the tournament so far.

The Blitzboks’ win set up a semi-final against New Zealand who beat 2016 Cape Town champions England 17-12 in the day’s second quarterfinal.

Against Fiji Senatla scored the winning try seconds from the end after Justin Geduld ripped the ball from a Fijian carrier.

There was an element of fortune as the ball appeared to go forward but Senatla hacked ahead and collected to score his second try of the match.

Earlier the Blitzboks’ record try-scorer was yellow carded in the first minute for a high tackle on his tryline and a penalty try followed for Fiji‚ which immediately put the home team on the back foot.

While Senatla was on the naughty chair‚ Fiji scored a breakaway try through Waisea Nacuqu‚ which he also converted to give the islanders a 14-0 cushion.

The Blitzboks showed their experience and composure by not falling apart and led by the direct play of Kwagga Smith‚ struck back when Werner Kok finished well in the corner.

But the Fijians showed how dangerous they could be by living off scraps and scoring another breakaway try through Josua Vakurunabili‚ who briefly silenced the 55000 home crowd.

On the stroke of halftime Geduld finished off another well-constructed move to keep the Blitzboks in the contest at 21-12 down at the break.

Senatla struck immediately after halftime and the home side were back in the game although Fiji again tested their composure by scoring a fourth – again from a deep break out – through Kalione Nasoko.

But Smith led the fightback with a surging break to score with under two minutes to play‚ which brought the home team into strike range as the game entered the crucial final minute.

When Senatla scored to steal victory‚ it was the first time the Blitzboks led in the entire match.