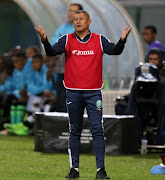 It's a crazy league where a lot of teams are playing to not lose‚ AmaZulu coach Cavin Johnson has admitted of the Absa Premiership‚ where his side earned a valuable 1-1 away draw against Orlando Pirates at Orlando Stadium on Saturday night.

In one of the most sluggish starts out the blocks in recent PSL history‚ Pirates regained the lead of the league despite having gone nine games with just one win‚ and having drawn eight of their 14 matches.

For the leaders of the PSL to have just 20 points just before the halfway stage is almost unthinkable‚ given that 60 is the mythical mark coaches aim for to win the championship.

There are teams with games in hand - notably second-placed Mamelodi Sundowns with 19 points from 10 games‚ and 11th-placed SuperSport United‚ with 11 from eight.

But it has been a PSL start characterised by a high quotient of draws and low-scoring games.

"It's a crazy league.

"It's been a few seasons since it's been this type of competition - where everybody is in it and there's no runaway team‚" Johnson said.

"But there are quality teams - Sundowns‚ Wits‚ Supersport. And two of those have games in hand.

"It just shows you that‚ if we play an open game maybe we'll get more wins than draws.

"But there are a lot of teams who are playing not to lose.

"And this is the effects of that - that we have so many draws this year.

"But‚ ja‚ maybe come the second half people will pull up their socks and they will definitely go for the win‚ wherever they are‚ but especially at home.

"Because that's what we plan - when you come to King Zwelithini [Stadium] we put a lot of umthakathi.

"And we put our best foot forward."