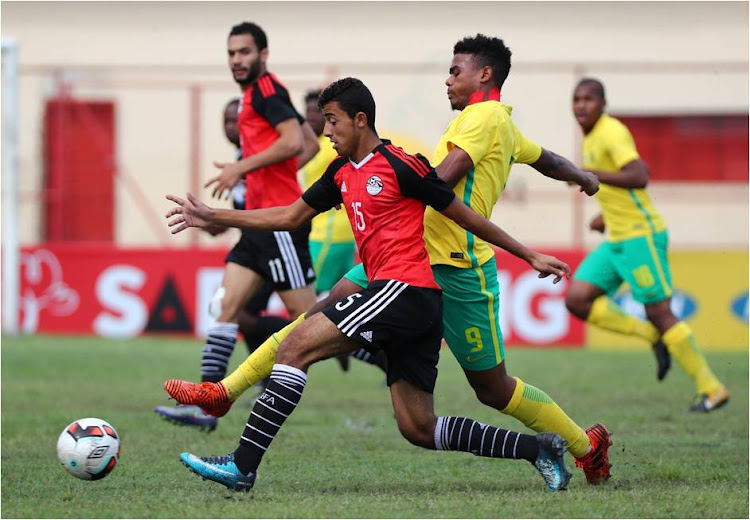 South Africa booked their place in the semifinals of the 2017 COSAFA Under-20 Championships with a hard-fought 2-1 victory over Egypt in Kitwe on Monday that showed the fighting spirit of coach Thabo Senong’s side.

Amajita, aiming for a sixth regional title having finished runners-up to Zambia last season, top their Group B with three wins from three and will now play the best runner-up in the knockout stages.

Their opponents will only be determined on Tuesday, but could well be the Egyptians again, along with one of Lesotho, Zimbabwe or Namibia from Group C.

Senong’s side were forced to come from behind for the win over the Young Pharaohs, who took the lead through Mohamed Karem on 18 minutes.

The Amajita defence stood static as the ball was allowed to bounce in the penalty-box and Karem reacted quickest to fire the ball past goalkeeper Khulekani Kubheka.

South Africa saw most of the ball in the first half after that, and almost grabbed an equaliser when Thabani Zuke’s pile-driver from 35-yards drew an excellent save from Egyptian keeper Mohamed Sobhy.

Amajita were level 10 minutes after the break though as Nkosingiphile Ngcobo’s deflected shot left Sobhy wrong-footed and he could only watch agonisingly as the ball trickled over the line.

And the South Africans grabbed the lead with 18 minutes remaining when Lyle Foster played an excellent through-ball for the pacey Luvuyo Mkatshana, and he slid the ball into the back of the net for his second goal of the competition.

There were plenty of nervy moments after that as the South Africans scrambled in defence and Kubheka had to be steady under heavy pressure, but they gutsed it out to hold on for the win.

East African guest nation Uganda also qualified for the semifinals as they topped Group A following a 1-1 draw with Malawi.

They will play the top side in Group C, which will be decided on Tuesday.