Nhlakanipho Ntuli back in Holland to breathe life back into career 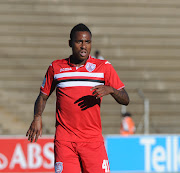 Forgotten forward Nhlakanipho Ntuli has returned to the Netherlands as he seeks to get his career back on track after a series of early setbacks.

Ntuli‚ a former star with the national Under-20 side‚ was included in Shakes Mashaba’s first Bafana Bafana squad three years ago‚ but since then has seen his career in steady decline.

He parted ways with Dutch club FC Twente just two years into a five-year deal in 2015‚ and also failed to impress in six months spent at Free State Stars at the end of last season.

Still only 21‚ he has rekindled his desire to play in Europe and jetted out this week‚ though there is nothing concrete as yet.

“There is nothing specific for Ntuli‚ but we are setting up opportunities for him and we will see what happens‚” the players’ agent‚ Mike Makaab‚ confirmed to TimesLIVE.

Ntuli rose steadily through the junior ranks at Orlando Pirates and was so highly-prized that Twente handed him a five-year contract as soon as he turned 18.

He played regularly for the club’s academy‚ but failed to kick a ball for the first team.

“There is no shortcut to success‚” Ntuli wrote on Facebook this week. “It takes hard work and perseverance‚ and [it’s] also not about who you are or how you get there‚ it’s about the legacy you leave behind when you die.

“I have many scars from my past but I’m not my past‚ I’m a man looking to the future.”