We relive some of the best goals of 2017 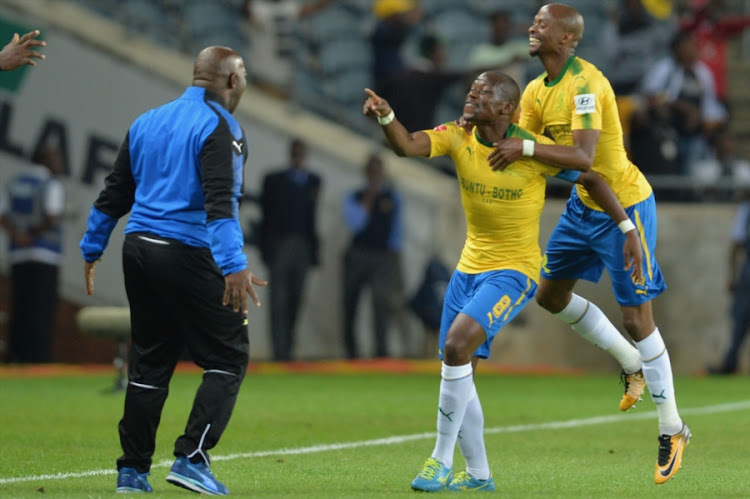 There have been some fantastic goals scored in South African football over the last 12 months. TimesLIVE picks our top five‚ in no particular order.

Mamelodi Sundowns midfielder Hlompho Kekana had ‘some previous’ when it comes to scoring from his own half having done it for Bafana Bafana against Cameroon in 2016.

That would have given him the confidence to try it again and he did so in a league game against Orlando Pirates.

Spotting Buccaneers goalkeeper Wayne Sandilands off his line‚ he launched the ball forward from 60-yards.

The back-tracking keeper should have done better to keep the ball out‚ but it was still a marvellous bit of audacity from Kekana to even attempt the strike.

The goal that was‚ somewhat controversially‚ voted Goal of the Season by fans at the end of the 2016/17 campaign ahead of Baroka FC goalkeeper Oscarine Masuluke’s sensational over-head kick against Pirates in October 2016.

The keeper was unfortunate not to win the award‚ but public opinion went with favourite Tshabalala and the quality of his strike is to be applauded.

He picked up the ball 25 yards from goal and as the SuperSport defence stood off him‚ chipped the ball over Ronwen Williams and into the net at the back post. It was another fine strike to add to his growing collection of memorable goals.

Polokwane City defender Ravhuhali blasted a free-kick from 35-yards into the corner of the net‚ but it was the power and the accuracy of the shot that was most impressive.

The free-kick specialist was always going to have a go and AmaZulu keeper Siyabonga Mbatha even guessed where he was going to put it‚ but could do nothing about the shot in the end.

It had pace and dip‚ crashing into the underside of the crossbar and crossing over the line. No keeper in the world would have saved the shot.

Ramagelela got one over his former club Sundowns with a brace of goals in a 2-1 win for Polokwane City in August‚ but it was the winner in that game that caught the eye.

The striker flicked the ball past a defender 35-yards from goal and as it sat up‚ produced a volley that speed past reigning African-based Player of the Year Dennis Onyango.

Sundowns coach Pitso Mosimane called it the “goal of Ramagalela’s life” and he was not wrong.

This goal was perhaps so good because it came from such an unexpected source.

Morton has not been prolific in front of goal and in his nine-and-a-half seasons career in the PSL he had produced two goals before this one and one of those was a penalty.

Wits would have thought there was little danger then we he picked up the ball 25-yards from goal‚ but the midfielder had a crack and smashed the ball into the back of the net.

It was a fantastic strike in a game that would end on a sour note for Morton as he was sent-off for his reaction to being spat at by Wits’ Gabadinho Mhango.

How Rodney Ramagalela is leading the way in front of goals

Polokwane City striker Rodney Ramagalela is leading the PSL goal scoring charts on the half way mark of the campaign with eight strikes to his name.
Sport
4 years ago

When the footballing year 2017 is compared to other years of international competition‚ it will be ranked as a major disappointment for the South ...
Sport
4 years ago

Muhsin Ertugral returns to Ajax Cape Town for a fourth spell to take charge at a club where he has enjoyed some good success in the past.
Sport
4 years ago

Players who bounced back to resurrect their careers this year

Every player goes through highs and lows in their career and for some 2017 has been a year of triumph as they have returned from adversity as better ...
Sport
4 years ago