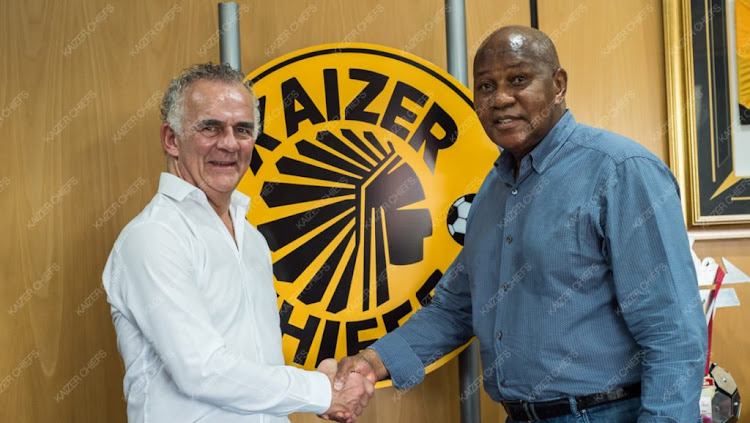 The club disclosed the news of the appointment on their official website on Tuesday.

Internet research suggests Hutting has never been involved in coaching at a professional team.

“Kaizer Chiefs would like to announce the appointment of Robertus ‘Rob’ Hutting as the club’s Technical Advisor to the senior and youth academy teams‚” Chiefs’ statement read.

“Hutting was born in the Netherlands in 1955.

"He holds a Uefa Pro licence from the Dutch National boards and a Masters Degree: Postacademical University Leuven/Belgium.

“He has played football as midfielder and striker for clubs in Holland and Belgium. He also coached a number of clubs in Belgium‚ Holland and Germany.

“Hutting will play an advisory role and help with the coordination of the two technical teams‚ working with coach Steve Komphela and his counterparts in the youth development.”

Hutting might have high qualifications but his coaching career shows no great highlights.

Among the 62-year-old’s clubs he has coached – all apparently in the amateur ranks – from 1990 are Maaseik FC‚ VV Bunde‚ RKVV Waubach‚ EHC‚ VV Walram‚ SV Venray in Holland and Borussia Freialdenhoven in Germany.

He played for clubs including NEC‚ Willem II‚ Fortuna Sittard‚ KFC Diest‚ Beringen FC‚ Helmond Sport and Maaseik in a career spanning 1973 to 1992.

“I am honoured to be here and will serve the club with pride‚” Hutting told KaizerChiefs.com.

“This is a special day for me. I have been following Kaizer Chiefs and South African football for a while and looking forward to working with coach Steve and the rest of the coaches here at Kaizer Chiefs.”

The club statement added: “Coach Steve Komphela‚ who was part of the process of bringing Hutting to Chiefs‚ welcomed Hutting to the club.

It quoted Komphela as saying: “A hearty welcome to Rob and we look forward to his cooperation and contribution to Kaizer Chiefs.”

Chiefs’ communications manager Vina Maphosa would not comment on Hutting’s appointment‚ saying all questions would be answered at a club press conference to be held at their Naturena headquarters on Wednesday.

Kaizer Chiefs signing Leonardo Castro began training with his new club on Tuesday‚ Amakhosi announced‚ appearing to end speculation the deal for the ...
Sport
3 years ago

One player with more of a point to prove than most in Tuesday night's Absa Premiership clash between Ajax Cape Town and Mamelodi Sundowns will be new ...
Sport
3 years ago

Questions have been raised about Chief Mwelo Nonkonyana’s eligibility in the race for the South African Football Association (Safa) presidential seat ...
Sport
3 years ago

A number of January recruits made fine starts at their new Premier Soccer League sides this past weekend‚ suggesting some good buys and shrewd ...
Sport
3 years ago