Mineworkers will get severance benefits if the sale of AngloGold Ashanti's Kopanong mine to Harmony Gold falls through. Picture: SIMON MATHEBULA

Image: MOMO HAVING A BALL DRDGold kicked off with an excellent set of results this week. 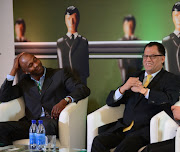 Former Bafana Bafana captain Lucas Radebe’s eligibility to run for the position of South African Football Association (Safa) president is in doubt after it emerged that he does not meet the requirements for the top job.

‘‘The electoral code says that the candidate needs to have served in the Safa structures for a period of five years in the lead up to the election‚” Maforvane said.

‘‘In the case of Lucas‚ he has never served in any Safa structure in the five years leading up to the election.

‘‘He has served in the Safa technical committee but that is not a Safa structure.”

Radebe told TimesLIVE on Tuesday that he is seeking further clarity on the electoral code and has asked Safa to furnish him with further details on whether he can contest the March 24 election or not.

‘‘I have spoken to a couple of people and I am waiting for clarity on the electoral code‚” Radebe said on Tuesday afternoon.

Asked if he would pull out of the race if Safa confirms that he is indeed ineligible to run‚ Radebe said: ‘‘I will be in a better position to make an announcement on the way forward after I have got clarity on the electoral rules.

‘‘I will let you guys know as soon as I have got more information about this.”

Maforvane explained that Radebe needed to have either served in the Safa regions‚ in the regional executive committees or in the Safa associate members.

Radebe said his decision to run for Safa president was never motivated by a hunger for power and he just wanted to give back to South African football as a former player.

‘‘For me it was never about power‚ but about concern for our football‚” the former Leeds United captain said.

‘‘I am really concerned about our football but I have not spoken to anyone at Safa about the rules.”

Radebe finds himself in a similar position to Chief Mwelo Nonkonyana‚ who discovered on Monday that there are questions being asked his eligibility to run for Safa president.

Nonkonyana is running for president but Maforvane said his expulsion by the association in October 2014 prohibits his inclusion on the nomination list.

Maforvane said besides the question of eligibility‚ Nonkonyana cannot stand against incumbent Danny Jordaan in the election as he owes Safa almost R900,000 after losing the court cases he instituted against the association following his expulsion.

Nominations open 60 days before the day of the election and Jordaan appears to be already in the driver’s seat.