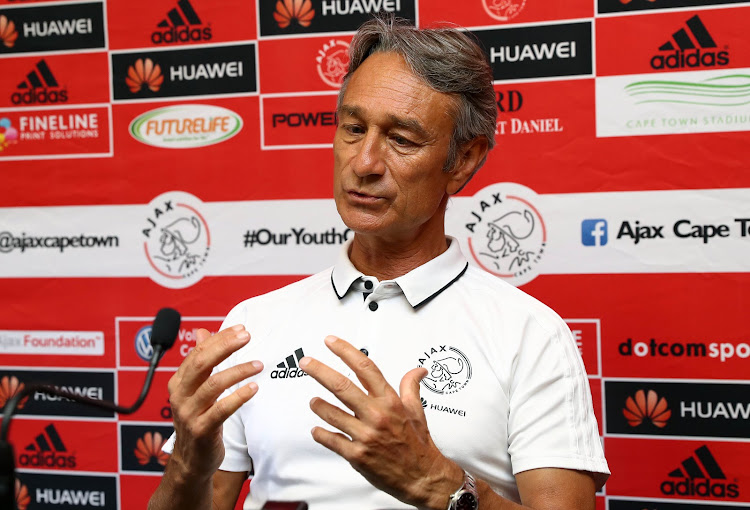 Ajax Cape Town lock horns with Platinum Stars in what is already shaping up to be a relegation six-pointer at the Cape Town Stadium on Friday night‚ with the victor able to strike a psychological blow against their fragile opponent.

Bidvest Wits’ 2-0 victory over SuperSport United on Wednesday lifted them off the foot of the table and sent Ajax to the bottom – but more than that it is perhaps a sign that they are finding form and will begin their climb away from the relegation places in the coming weeks.

That potentially leaves Ajax‚ Stars and AmaZulu to fight it out to avoid the bottom two places this season‚ with the potential for Polokwane City and Lamontville Golden Arrows to get sucked in too‚ meaning this weekend’s fixture‚ in the midst of a hectic January for Ajax‚ is a massive one.

That is more so as they come off back-to-back 2-1 defeats to Maritzburg United and Mamelodi Sundowns on Tuesday at the start of what is coach Muhsin Ertugral’s fourth spell in charge of the side.

They led in both those games but could not keep their opponents at bay‚ though they showed enough signs against the powerful Sundowns side to suggest they have already improved under Ertugral.

“Stars are a direct partner to us‚ it is a bit unlucky that the game is on Friday because the effort the players put in [against Sundowns] has taken a lot out of them.

"We have to see how quick they can recover‚” Ertugral said.

He was pleased with many aspects of the team’s play against The Brazilians‚ but says organisationally they need to improve further.

“Our big problem is our entrance into the final third‚" he said.

"When we have the ball we have a pattern we do.

"In the second zone the midfield needs to be a little bit better in securing the ball‚ they want to go up too quickly to the third zone and then they lose the ball.

“That has not been corrected‚ but in six training sessions you cannot do that. The effort is there‚ but I am still not happy with the organisation.”

Ajax handed debuts to Samuel Julies‚ Muzi Thabotha and Gerald Takwara on Tuesday‚ and will be hoping to now do the same for Zimbabwean forward Tendai Ndoro if his work permit is approved in time.

They are certainly an improved side under De Sa‚ but two defeats in their last three games has kept them close to the basement.

The latest was a 1-0 home reversal against Cape Town City last weekend‚ when De Sa felt basic errors cost them‚ something they will need to stamp out.

“The difference is that they had three chances‚ we had one or two‚ but they took their chances and we didn't. That's where the difference was.

“You want to be clinical and you have got to tighten at the back. We made one mistake at the back and we were punished for it.”

Stars’ last away success in Cape Town was in 2013 when Solomon Mathe and Robert Ng’ambi were on target.