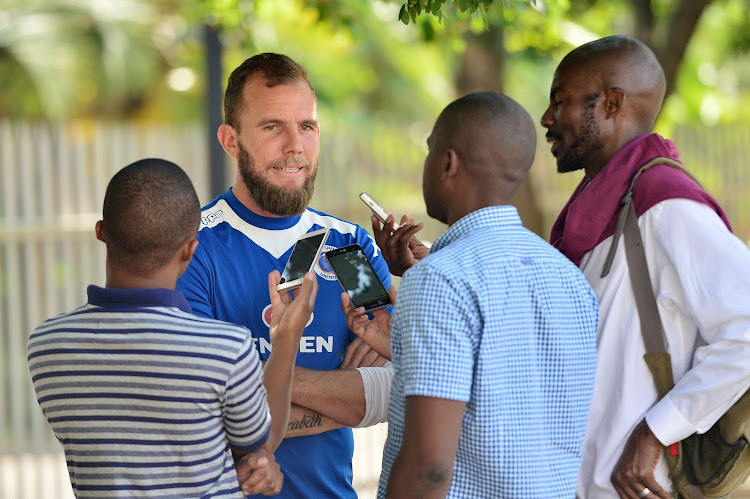 Eric Tinkler does not know if Jeremy Brockie is coming or going at SuperSport United‚ and apparently nor does the striker.

That was the coach’s appraisal of a distracted performance by the Kiwi forward against Bidvest Wits on Wednesday night amidst speculation‚ again‚ of a move for Brockie to Mamelodi Sundowns.

Reports are that Downs have since been given permission to speak to Brockie about a transfer.

SuperSport caught Wits on a night when the champions were desperate for a rebound and the three points to get off of bottom just past the Absa Premiership’s halfway stage‚ and the Pretoria team lost 2-0 at Bidvest Stadium.

Tinkler’s team never recovered from being blitzed in the opening half-hour‚ and their movement was poor on the night.

But Sundowns target Brockie was particularly a non-entity‚ being substituted in the 67th minute by Thabo Mnyamane.

By Wednesday night’s performance‚ the sooner the striker goes the better for both clubs.

“I thought tonight‚ well‚ I dunno. Ask him.”

Brockie had been the centre of a transfer storm in August when SuperSport CEO Stan Matthews had told TimesLIVE that the prolific Kiwi striker would not be allowed to “sulk” his way out of his contract.

The centre-forward had been dropped for an MTN8 semifinal against Maritzburg United after a distracted performance in a league match against Chiefs‚ amidst intense speculation of a move to Sundowns.

Brockie has gone on to his worst season so far in South Africa‚ with one goal in 13 league apperances.

The striker did manage three goals in three starts as Wits won this season’s Telkom Knockout.