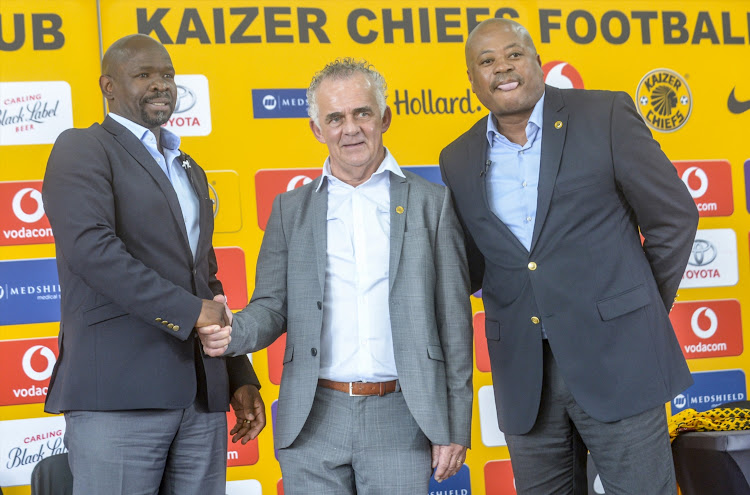 Kaizer Chiefs struggled to provide conclusive previous work experience that might qualify Rob Hutting as a new technical advisor to the club as the little-known Dutchman was presented to the media this week.

Hutting (62) has never coached above amateur level – most of his teams in Germany or Holland were in the fourth‚ fifth or sixth divisions.

Nor has he been a technical advisor‚ though Hutting does have his Uefa Pro license‚ the highest-level coaching qualification‚ and a masters degree.

Hutting appealed to the media not to “kill the baby before it is born”.

But then both he and Chiefs could not provide any additional information on what qualifies Hutting as a technical advisor to the club.

Put to Hutting that all the media in South Africa know about him has been gained on the internet‚ and asked to fill in the gaps‚ he said: “You can choose. Either you want an internet coach‚ or you want a qualified coach.

“For me the question is OK. But I prefer that you came after three months and then asked the same question.”

Motaung interjected and said: “I think the CV on its own‚ and the conversations we had last year‚ and profiling‚ assessments and research we’ve done on Rob‚ were satisfactory to us.

“And we felt that we would try this six-month thing‚ because Rob is not a ‘paper’ coach. He’s a practical person in terms of work that he’s done.

“And his job speaks for itself. We’ve done research in Holland and Germany in terms of what his capabilities are.

“When we had Conti Kubheka here (as head of development) he came in with certain expertise‚ not to be able to coach. Rob is not a technical director – he’s a technical advisor.

“And he’s not a supervisor‚ he’s an advisor. So the coach (Steve Komphela) still has decisions to make (based on) his own view of the work that Rob indicates to him.”

Motaung suggested Hutting would advise Chiefs on technical aspects such as finishing.

“We produce good football but the lack of finishing has let us down. That’s why we brought in Rob to come and assist in terms of certain technical aspects of our game.

“He’s going to be dealing with the head coaches and youth coaches in terms of the training methodology that we have‚ putting emphasis on certain aspects.

“Because‚ remember‚ football has developed. We’ve got people who specialise.

“We’ve got goalkeeper-coaches today‚ which we never had in the past. You’ve got the sports science‚ physical aspects‚ video analysis.”

Komphela suggested the advisor would work more on mental aspects.

“There’s an element in South Africa that I think is strongly lacking – the mental aspect of the game‚” Komphela said. “Which is where we are saying‚ can we get such expertise?”

Motaung‚ pressed further on Hutting’s credentials‚ said: “At the moment football is more practical. It’s not a contract‚ it’s not paperwork.

“It’s more about what you do on the day and produce. And he’s more a practical man than a talker and a media person.

Asked what had impressed Chiefs most about Hutting’s record‚ Motaung said: “It’s the character‚ not just the record.

“The record could be a number. It could be paper. But it’s the aura of the man and the personality‚ and the experience he has got.

“And how he presented himself to us. Also looking at the work ethic. We’ve got referrals and letters from people where he worked and he’s obviously recommended.

“But football is about practicality. You could have a good CV in football but when it comes to practicality‚ I can name coaches who are high in profile and experience but practicality is different.”

Hutting has joined Chiefs on a six-month contract with an option to renew for a year.