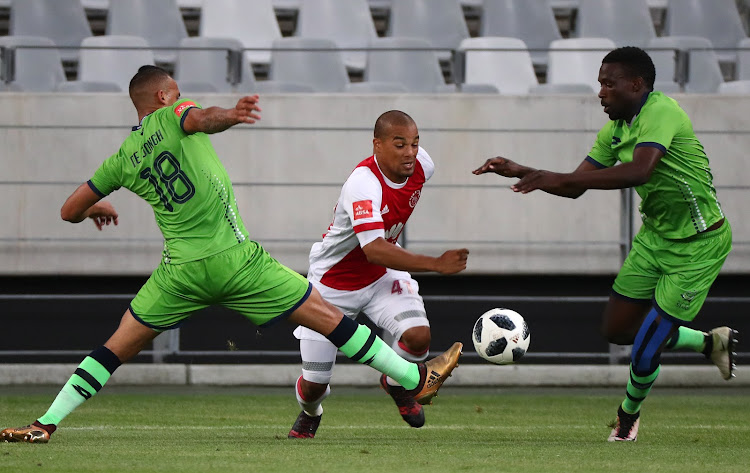 Tendai Ndoro scored on debut as Ajax Cape Town came from behind to defeat fellow strugglers Platinum Stars 3-1 on Friday and gain a massive three points in their bid to move away from the relegation zone.

Zama Rambuwane had put the visitors ahead on debut, and with his first professional goal to boot, and it looked as though Ajax could slip to a fourth straight defeat.

But goals in the second half from Tercious Malepe, his first in the Premier League, Tashreeq Morris and Ndoro sealed victory for the Urban Warriors, pushing BidVest Wits to the bottom of the table once more and Stars into the relegation play-off position.

Ajax coach Muhsin Ertugral made two changes to his starting line-up from the side beaten 2-1 by Mamelodi Sundowns on Tuesday, also handing a first start Zimbabwean midfielder Gerald Takwara.

Aside from Ramabuwane, Stars made two other changes from their last outting, with Manti Mekoa and Ryan de Jongh also brought in to the team.

It was the visitors who applied the early pressure, with Bongi Ntuli almost squeezing past the Ajax centre-backs, Issac Nhlapo and Mario Booysen, but he was unable to control the ball.

It took 24 minutes for Ajax to have their first sight of goal. Tercious Malepe worked hard to keep the ball in play on the left and his cross was headed straight at Stars keeper Dino Visser by Fagrie Lakay.

The visitors gave a warning of their prowess in the air when Ramabuwane’s cross from the left was headed just wide by Ntuli, while at the other end Ndoro showed a neat turn on the edge of the box, but dragged his shot wide.

The decisive moment of the half came on 40 minutes though when Ajax’s centre-backs were punished again, this time as Vuyo Mere’s cross was headed home by Ramabuwane.

Ndoro almost opened his Ajax account in superb style when Tashreeq Morris delivered an excellent cross from the right and the Zimbabwean produced a bicycle-kick that was on target, but saved by Visser.

Ajax were building up a head of steam though and they deservedly found an equaliser through Malepe, who had a tap-in after Samuel Julies’ shot had fallen into his path off the post.

There was only one side in it now and Ajax hit the front with eight minutes remaining, Morris thundering the ball home from the edge of the box with one of the more powerful strikes you will see all season.

Substitute Masilake Phohlongo might have sealed the victory for the home side when he was played one-on-one with Visser, but the goalkeeper did well to make a smothering save.

But the victory was sealed when Ndoro raced into the area and blasted the ball in off the underside of the crossbar, much to the relief of the Urban Warriors’ bench.

Ajax are next in action on January 20 when they take on Cape Town City at the Cape Town Stadium while Stars must travel to Mamelodi Sundowns on the same day.

Mamelodi Sundowns coach Pitso Mosimane hopes to see a 4-3 scoreline‚ or some such high-scoring equivalent‚ when his side meet Orlando Pirates in the ...
Sport
4 years ago

Luc Eymael has said that his Free State Stars side must remain humble and with their feet on the ground as they face the potential of moving into ...
Sport
4 years ago