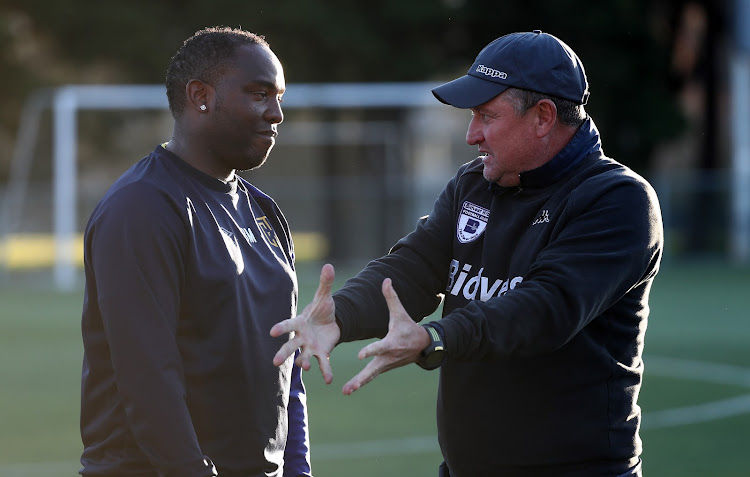 Benni McCarthy might have been playing mind games or being humble‚ but if he was‚ he put up a pretty convincing act at appearing shaken at drawing “the shark”‚ Gavin Hunt and his Bidvest Wits‚ again‚ this time in the Nedbank Cup.

City beat Wits in both legs of their semifinal‚ and two weeks before beat the Clever Boys in the Absa Premiership at Bidvest Stadium.

Three victories in 25 days‚ two away and one home‚ by the team coached by the ‘student’ against Hunt – the four-time league-winning coach who gave McCarthy his playing debut at Seven Stars in 1995 – did not sit well with the ‘master’.

Especially not since those results played a role in Wits’ astonishing self-implosion in 2017-18‚ from which they are only just showing signs of recovering even though they remain in second-last place in the league.

“I came here hoping for a really tough‚ but nice‚ opposition.

"You know‚ NFD‚ or maybe something at home‚” McCarthy grinned ruefully after the Nedbank last-32 draw on Monday night in Sandton.

“And then I get the shark. Jissus.

“But what can you do? That’s football for you.

“But umm‚ ja‚ I think the boys aren’t going to need much motivation. Because when you play the league champions who needs motivation

“And I think we’ve proven it in the beginning of the season where I was probably the most scared I’ve ever been facing the coach that launched my career as a player.

“And I think we handled it pretty well. And that gave me a little bit of confidence.

“And now we have to just must make sure that we go into this encounter well prepared.

“We’re going to grind it out.

"We’re going to go back to the drawing board so that when the time comes we are ready for Wits like we were in the MTN8 and the league.

“It’s just getting them in the Nedbank again‚ and then a week later in the league.

City meet Wits in the Nedbank between February 8 and 14.

They play the Clever Boys a fifth time this season on February 24.

Asked if perhaps his three wins so far indicate McCarthy might have Hunt’s number‚ City’s coach replied: “No – the past is the past. We don’t relive it.

“It’s a fantastic memory to have. But now – shew. Those boys (Wits) will be psyched up.

“And Gavin’s made a few changes so they’ve looked much better. They look stronger.

“Maybe then they won’t focus too much on the Nedbank‚ trying to focus more on the PSL.”