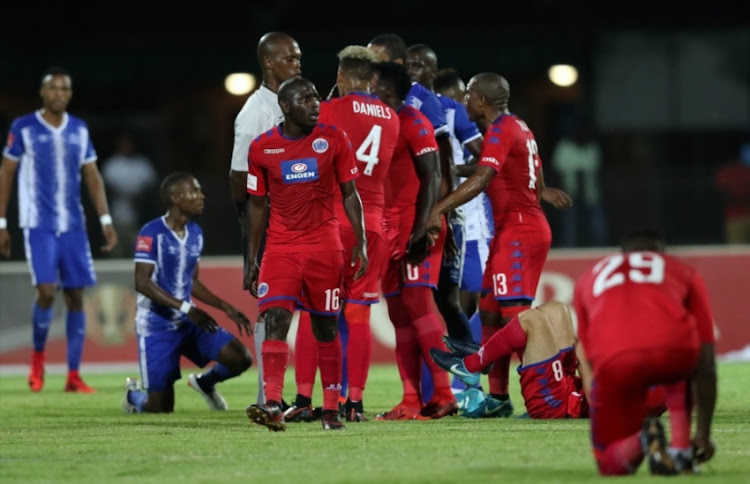 Players argue with the referee during the Absa Premiership match between Maritzburg United and SuperSport United at Harry Gwala Stadium on January 17, 2018 in Pietermaritzburg.
Image: Anesh Debiky/Gallo Images

After eight games without a win, playing away against dangerous opponents, one-time definite title hopefuls Matsatsantsa clearly went to the KwaZulu-Natal capital intent on playing to a disciplined gameplan, and without ambitions at being overly clever or attacking.

They largely absorbed what Maritzburg had to throw at them, and only probed sporadically for chances to try to sneak they three points.

And SuperSport buried one of those in a game of very few opportunities, Aubrey Modiba snatching a 78th-minute winner.

The first half was marked by industrious, quick football in the middle of the park, though with almost no end product.

Maritzburg, confident from a 4-0 win over Bloemfontein Celtic at Harry Gwala on Friday, tried to go at SuperSport, who were organised and resilient in defence.

Matsatsantsa, for their part, were cautious to commit numbers forward, creating their first chance at the end of the half.

Maritzburg had a half-chance just before the half-hour as Evans Rusike's chip found Deolin Mekoa on the right, who got his boot too far under a shot over the bar.

In the 45th Thuso Phala put Modiba through on the right, the SuperSport utility man's low strike slipping wide across goal.

Maritzburg upped the ante troubling SuperSport in the second half as Mekoa saw a shot on the hour blocked by Sipho Mbule, on moments earlier for an injured Thabo Mnyamane.

Matsatsantsa found some form of their own rythm going into the final 20 minutes, Modiba striking one straight at United goalkeeper Richard Ofori.

As both sides scented a chance at three points rather than one, a match in which space had been compressed to a minimum found some ability to breathe.

SuperSport had sat the deeper of the two teams - though not by much. But they had looked the more likely to score when they did get in front of goal.

The Pretoria team snuck the three points in simple fashion, a Phala cross from the right being flicked on by Kingston Nkhatha to Modiba, who clamly slotted low past Ofori.