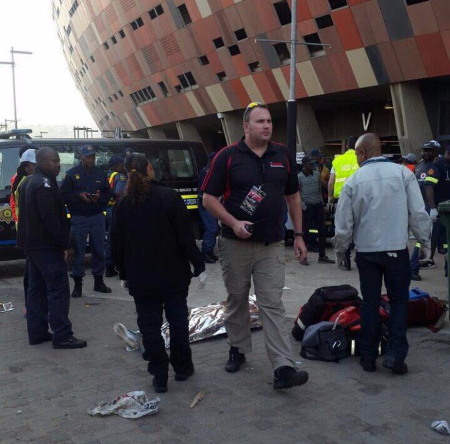 The scene outside FNB Stadium after the stampede that killed two people.
Image: Supplied

Sports Minister Thembelani “Thulas” Nxesi says the commissions of inquiry into maladministration at Sascoc and into the death of two soccer fans at a preseason match at FNB Stadium are going full steam ahead despite delays to their start.

The separate ministerial commissions of inquiry into safety and security at football matches‚ as overseen by the Premier Soccer League‚ and issues of poor governance at Sascoc (The South African Sports Confederation and Olympic Committee) were supposed to start this month.

A press release from the department of Sport and Recreation this week stated: “Both Committees will only have (their) pre-public hearings meeting as from 5 February 2018 in preparation of the public hearings which will in all likelihood commence on 12 February 2018 until April 2018.”

Nxesi said the delays were due to “administrative hiccups”.

He continued: “Remember that there was this period of a break for the festive season holidays.

"They (football and athletics) had to take a break and both commissions had to say‚ ‘We will start properly in February’.

“We expect them to start then in full.

"They have already started‚ by the way‚ calling for submissions‚ some people have made submissions‚ and that’s the brief which they have been giving me.

“The two judges who have been dealing with that process in relation to the inquiry into (FNB Stadium)‚ Judge (Ronald) Pillay‚ and in relation to Sascoc‚ Judge (Ralph) Zulman‚ have been briefing me that they are going to start now with the actual engagement and people leading evidence‚ and they have received all those submissions.

“Both those commissions are steaming ahead‚ doing the deal.

“And I want to appeal for anyone who has anything to say to come forward and speak before the commissions.”

Sascoc had threatened to attempt to interdict the minister’s inquiry into them.

“This far we have not been interdicted‚” Nxesi said.

“They have sought clarity from us‚ and we have been able to give that‚ and that we are acting in terms of the Sports and Recreation Act of South Africa‚ where I have a mandate on oversight on all the sports federations.”