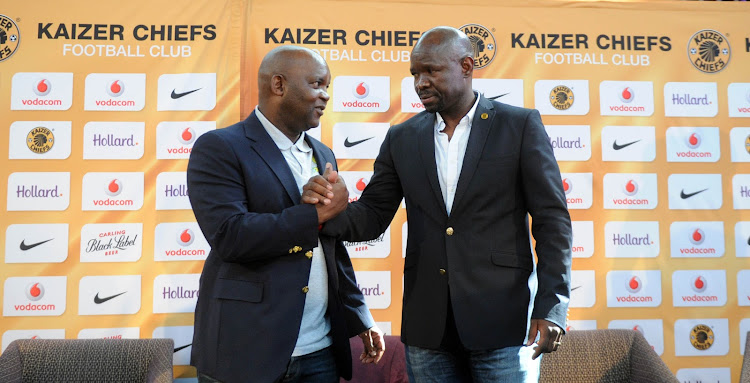 Kaizer Chiefs coach Steve Komphela has been victorious in his last two meetings with Mamelodi Sundowns counterpart and friend Pitso Mosimane‚ but the latter has held sway in the 15 years of the pair being in the opposite dug-out.

Chiefs host Sundowns in a crunch Premier Soccer League clash at the FNB Stadium on Sunday‚ where victory would move them to within two points of league leaders Sundowns.

Along with the Soweto Derby‚ it is arguably the biggest game of the campaign for Chiefs‚ who have beaten Sundowns 2-1 in their previous two clashes‚ including earlier this campaign.

But in the long history of clashes between Komphela and Mosimane‚ it is the Sundowns boss who has had the more success.

The pair have met on 13 occasions‚ with six wins for Mosimane‚ three for Komphela and the other four games drawn.

They first clashed in December 2003 when Komphela was in charge of Dynamos. He only won two of his 18 games at the club‚ but one of those was a 3-1 success over Mosimane’s SuperSport United.

Komphela also had two spells in charge of Manning Rangers that campaign‚ but he did not face Matsatsantsa in either of them.

With both coaches working in the South African Football Association (SAFA) structures after that‚ it would be a decade before they clashed again.

Mosimane was then in charge of Sundowns and Komphela at Free State Stars. The first game ended in a 1-1 draw‚ with the next two a pair of 2-1 successes for Sundowns.

Komphela then moved on to Maritzburg United and in his first two meetings with Sundowns managed 1-1 draws‚ before The Brazilians won 2-1.

But the rivalry was really ramped up when Komphela joined Chiefs ahead of the 2015/16 season‚ though he had to wait five games for success.

Before that Mosimane masterminded two 3-1 wins‚ a 2-1 victory and there was a 0-0 draw.

But Chiefs claimed a 2-1 success at the end of last season‚ before repeating the dose last October as Siyabonga Ngezana netted on debut and Bernard Parker got the second.

Eric Hamren took a year’s break from football after coaching Sweden at Euro 2016‚ and then wanted a new challenge‚ which presented itself in the form ...
Sport
4 years ago

SuperSport United were well on their way to grinding out an unappealing Absa Premiership victory against Polokwane City at Lucas Moripe Stadium but ...
Sport
4 years ago