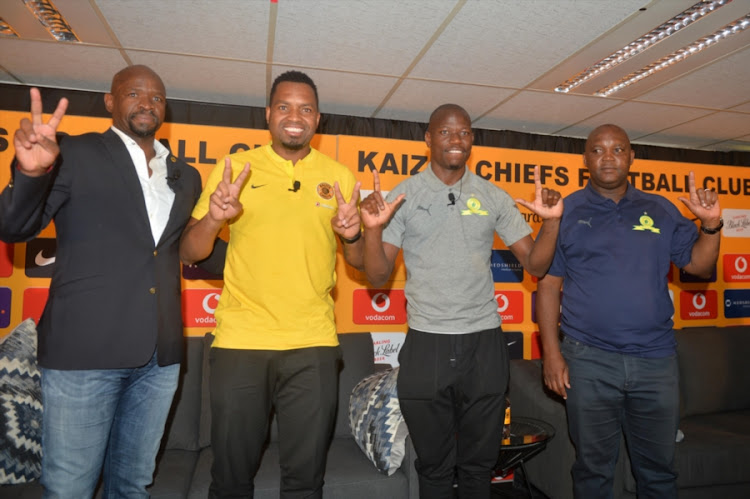 A game of numbers erupted between the two men who are likely to play significant but differing roles when Kaizer Chiefs and Mamelodi Sundowns meet in a mouthwatering Absa Premiership clash at the FNB Stadium on Saturday.

Chiefs goalkeeper Itumeleng Khune claimed his team dominated the attendance in the stands when they beat Sundowns 2-1 away from home in the first round at Loftus Versveld last year.

“We had more fans than the home team (at Loftus)‚ and everywhere we go we have more fans‚" Khune said.

"We fill up the stadiums.

“Just this past weekend we were away to Baroka but it felt like it was our home game‚” said Khune when he was asked of the growing stature of the game between Chiefs and Sundowns.

This didn’t sit well with Sundowns coach Pitso Mosimane who‚ without presenting any facts or numbers‚ was quick to call Khune to order saying “maybe before” Chiefs would have had those numbers‚ leaving the Chiefs goalkeeper and the audience rolling with laughter.

“I just want to correct Itu (Khune) in that they had more support than us at aLoftus.

"His numbers are not right.

"They used to be before… not anymore‚” said Mosimane.

Another contentious issue between the two was the number of goals Mosimane was hoping to see being scored by both teams on Saturday.

"If there’s a difference of a goal‚ let’s have 5-4. Beautiful‚” said Mosimane.

In reply‚ Khune said there’s no way he would allow such a high number of goals to go past him on Saturday. He promised to keep a clean sheet.

“I don’t agree with coach Pitso when he says we must let in three goals. I don’t want to concede three goals‚" Khune said.

“Even George (Lebese) advised me to stay on my line in order to avoid conceding those long-range shots of Hlompho (Kekana).

“Yes we want to see goals but that means we should not have goalkeepers on Saturday.

"So we want to keep a clean sheet and I’m glad our strikers have their scoring boots.”

Will Chiefs v Sundowns be the Castro v Brockie show?

Saturday night’s big Absa Premiership contest between Kaizer Chiefs and Mamelodi Sundowns at FNB Stadium has the potential to turn into the Leonardo ...
Sport
3 years ago

Jeremy Brockie may not start against Kaizer Chiefs this weekend‚ Mamelodi Sundowns coach Pitso Mosimane said as an assurance to Amakhosi goalkeeper ...
Sport
3 years ago

Kaizer Chiefs coach Steve Komphela has been victorious in his last two meetings with Mamelodi Sundowns counterpart and friend Pitso Mosimane‚ but the ...
Sport
3 years ago