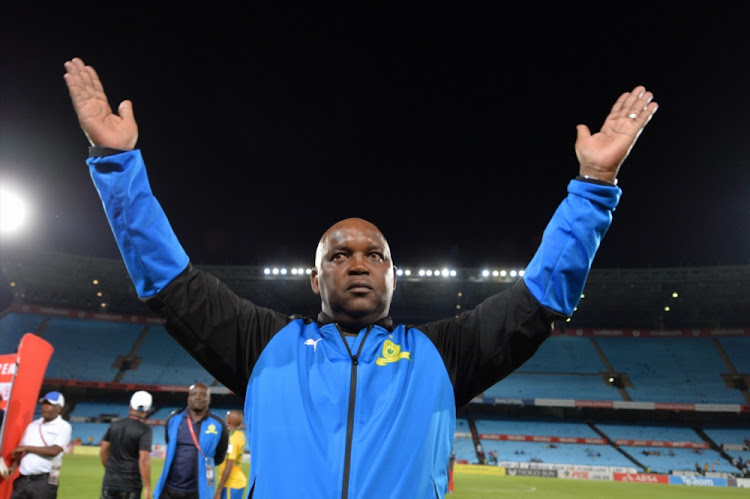 If Kaizer Chiefs versus Mamelodi Sundowns at FNB Stadium on Saturday night were a chess game‚ both coaches‚ buoyed by some big-name signings‚ would have pieces‚ but Downs coach Pitso Mosimane just a few more of them.

Chiefs are a new-look team in 2018. They were starting to look promising at the end of 2017. Since a 1-0 away defeat against Chippa United on December 6‚ Amakhosi have not been beaten in the Absa Premiership.

They have won four and drawn one. Not one of their victories has come by more than a single-goal margin. None have been overly convincing. Even in a 2-1 defeat of Baroka FC in Polokwane on Saturday it took Leonardo Castro’s gem slammed in as a substitute to earn victory.

But the results have kept coming as the energy and quality injected by the youngsters introduced last year‚ and arrival of big-name signings Castro and Siphelele Ntshangase this year‚ has lifted confidence.

Still‚ looking at Saturday night’s game‚ Komphela does have more options than he used to have; and he also still has less than Mosimane.

If Komphela opts to start with on-form young centre-forward Ryan Moon‚ and perhaps start Ntshangase‚ he has Castro coming off the bench as an impact player‚ but not a whole lot more.

Orlando Pirates want to handle rough diamond teenage striker Lyle Foster with cotton wool‚ bringing him along “step by step” so he can realise his ...
Sport
3 years ago

Even the promising Dumisani Zuma does not compare to the awe-inspiring show of strength that Downs displayed brushing aside Platinum Stars in their last game 3-0.

Mosimane‚ unlike Komphela‚ can opt to leave his new toys – Gaston Sirino‚ Aubrey Ngoma and Jeremy Brockie – on the bench and continue with the armoury (Percy Tau‚ Sibusiso Vilakazi‚ Khama Billiat‚ Themba Zwane‚ plus the firepower behind them)‚ that has taken Downs to top of the log.

Or he could give someone like the exciting Uruguyan Sirino a start‚ and have the latter names off the bench.

It also does not necessarily mean Downs will win. Chiefs’ 2-1 victory at Loftus Versfeld in October‚ shutting the Brazilians out with a then-new 3-5-2 formation that Komphela has since continued‚ and succeeded‚ with‚ showed that.

But Downs are strong. That much cannot be argued against.

Mosimane has tried to talk up Chiefs‚ and play down Sundowns‚ this week.

He’s hinted at a tweaked Sundowns gameplan from their normal Barcelona-esque high press. Something more pragmatic‚ perhaps offering some counterattack in response to the approach Chiefs will no doubt employ. Such talk can be aimed at sowing confusion.

“And I also saw the first half of Baroka‚ where that boy‚ the No.7 (Talent Chawapiwa) gave then a run for their money. But only once Chiefs gave Baroka space behind.

“And you can say the same about Sundowns. When we give space behind‚ Rama-G becomes a player who Barcelona want. But when you compress the space it becomes totally different.

SuperSport United have announced the signing of Mogakolodi Ngele from Mamelodi Sundowns on a six-month loan deal.
Sport
3 years ago

“So‚ ja‚ Kaizer Chiefs do score goals. But they’re not free-flowing. They’re not 100 percent convincing.

“They want the speed. They also want to go out on the break. And they come out on good breaks.

“And that’s how‚ to be honest‚ they’ve been difficult to us. You remember the goal that Bernard Parker scored (at Loftus). Ball put behind and he runs into the space.

“Just look at the games and the goals that we’ve conceded. It’s from the transition‚ on the break.

“But we have also won with the way we have wanted to go. I don’t know. It’s a give and take.

“It’s a game where I’d like us to score first. Because it will make them come to us. And then we would have that game that I like.”

Chiefs-Sundowns is usually worth watching. This game between the leaders and PSL favourites and an Amakhosi‚ as they have in patches the past two-and-a-half seasons under Komphela‚ threatening again at form‚ has been much built up.

The contrast in styles‚ the stars on show. If you’re not there‚ then you know the channel. Tune into it.

Lawyers of the South African Football Association (Safa) have applied to postpone a high court case of unfair dismissal against them by Chief Mwelo ...
Sport
3 years ago