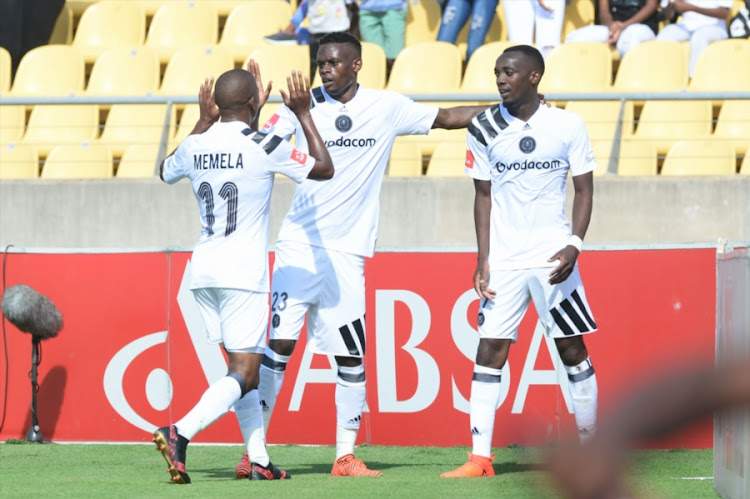 Orlando Pirates’s upped their chances of mounting a serious challenge to the Absa Premiership title when they beat a hapless Platinum Stars through Justin Shonga and Thembinkosi Lorch goals in each half at the Royal Bafokeng Stadium on Saturday afternoon.

Pirates, who moved to second on the log with 30 points a few hours before log leaders Mamelodi Sundowns clashed with the other title challengers and rivals Kaizer Chiefs,  always had the upper hand in this match and should have won with a far convincing score-line.

That it took 28 minutes for the Buccaneers to open the scoring - through the Zambian international Shonga - was down to their wasteful ways in front of Dino Visser’s goal.

Milutin Sredojevic’s team should have gone ahead as early as the 4th minute when Thembinkosi Lorch found himself one on one with Stars keeper Visser but chose to blast the ball only to ricochet off Visser’s face.

But before Lorch’s blunder Stars had also missed their sole attempt on goal in the first 45 minutes, Bongi Ntuli’s shot brilliantly parried away by Bucs keeper Jackson Mabokgwane when the visitors' defence was caught napping in the 3rd minute.

From then on it was Bucs all the way and had they been patient and precise with their final pass and shots at goals they would have finished Roger de Sa’s team in the first half.

Shonga headed in his first goal of the season when Innocent Maela provided an inviting cross on the left.

Stars defending left much to be desired as Shonga managed to head in past Visser despite being sandwiched by Dikwena’s centre backs.

De Sa’s team raised their tempo in attack in the second half and gave Bucs fans a few scares when they bombarded their goalmouth with dangerous shots, with striker Zama Rambuwane coming close on a few occasions to beat Mabokgwane.

Just as Stars were pushing for the equalizer Pirates found more spaces in the middle of the park and used breaks to attack.

It was through one of those counter attacks that Luvuyo Memela brilliantly centered for Lorch to thunder in the killer punch in the 72nd minute.

Stars came to this match in a sorry state – sitting at the bottom of the log with 15 points after 18 matches and on a back of three losses in their last three outings since the year started.

The Buccaneers on the other hand have not been too far off the leaders, their 1-1 home draw against Polokwane City last week, the only blot this year in what has been a vastly improved campaign for the Soweto giants under the Serbian coach Sredojevic.

Pirates first two matches this year saw them notching up 3-1 victories against Baroka FC and Mamelodi Sundowns, with Memela contributing a total of three goals in those two matches to be Bucs joint top scorer with three strikes alongside Thamsanqa Gabuza.

The league results between Stars and Pirates have been close over the past few seasons, the previous three encounters ending in stalemates.

Bucs last defeated Stars in 2014/15 season when Lehlohonolo Majoro and Lennox Bacela scored in a 2-0 away win.

Ajax held by Stars, Maritzburg throw away a lead in draw against Chippa

Yannick Zakri made his debut for Ajax Cape Town, but there would be no fairytale goal as the Premier Soccer League strugglers were held to a 0-0 draw ...
Sport
3 years ago

Manager Arsene Wenger said on Friday that Arsenal were responsible for striker Alexis Sanchez missing a drug test on the day he completed his move to ...
Sport
3 years ago