Chiefs coach Komphela reflects on what might have been 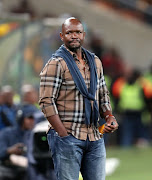 Regret rather than disappointment was the overriding post-match emotion for Steve Komphela after Kaizer Chiefs drew 0-0 with Mamelodi Sundowns in front of some 70 000 at Soccer City on Saturday night.

“If I had been feeling disappointment then I would not be recognising the qualities of the opposition we were playing against‚” said the Chiefs coach.

Chiefs moved up into joint second place in the Premier Soccer League standings after the result‚ but still five points behind leaders Sundowns.

“They are a good side‚" Komphela said.

"But we got three points against them in the first round of the league and a point now.

"We would have loved to have won it‚ we had our chances.

"The players did their utmost best but we couldn’t score.

"Although it was a 0-0 draw it was an exciting match.

"But there can be no disappointment‚ it’s rather a case of regret.

“Disappointment would come across as a heavier emotion. I regret that we did not take our chances.”

Komphela said such high-profile matches were won or lost on small margins.

“I thought for the supporters it was a game of good energy but for us coaches‚ who are looking for results.

"There is a feeling we could have scored one or two.

"There were indeed possibilities for us‚ in the first half and one in the second half when (Willard) Katsande headed over the bar.

“But let’s not forget they also threatened.

"A couple of times they got behind our defence and we needed to clear.

"This game could have been won on a single set play but it did not have too many of those.

“The 0-0 draw meant we are still stuck where we are before the game started but we must now move on and search for three points elsewhere‚” the Chiefs mentors added.

Chiefs now have 30 points with 11 matches still to be played.

They are next away at champions Bidvest Wits on Saturday.