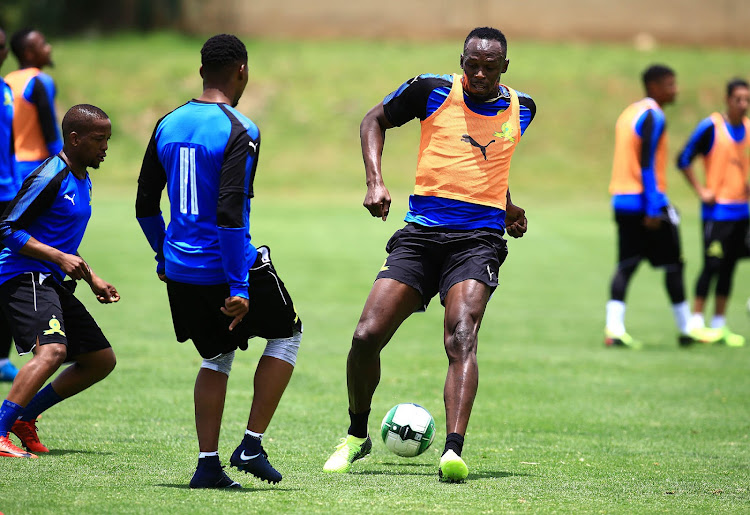 Retired athletics legend Usain Bolt is dead serious about pursuing a soccer career but if his performance at the Mamelodi Sundowns training session on Monday is anything to go by‚ he has his work cut out for him.

The eight-time Olympic champion joined coach Pitso Mosimane’s charges during the PSL club's morning session in Chloorkop and by the time the Sundowns coach was done with him‚ he was visibly gasping for breath.

The 31-year-old Jamaican‚ who is a staunch Manchester United fan‚ admitted that he was far from fitness and he will need to whip himself back into shape ahead of a trial at German side Borussia Dortmund in March.

‘‘Throughout the years I decided that when I retire and if I ever get the chance‚ I would pursue this (a soccer career)‚” he said.

‘‘It is something that I would like to try and I am very serious.

‘‘If you follow in the media you will see that I am actually getting a trial (at Borussia Dortmund) in March. So I am going to try and get fit for that.

‘‘But this (the Sundowns training session) really tells me that I am unfit.”

Bolt initially kept up with the premiership league leaders during training but as the unforgiving morning sun and the session itself started to take their toll‚ he noticeably dropped back and eventually left the field.

‘‘It was a very good experience (training with Sundowns)‚” he said.

‘‘I do not know how quick I am with the ball but if I kick and run I can get there.

‘‘I was just telling the coach (Mosimane) that when I go back to Jamaica‚ I need some training.

Bolt retired from the track after the World Championships in London in August last year and while he has his sights set on a soccer career‚ he said cricket was his first love.

Retired Jamaican athletic superstar Usain Bolt joined Mamelodi Sundowns at training on Monday morning and showed a glimpse of what he can do on a ...
Sport
3 years ago

‘‘I have always played soccer but cricket was my first love‚” he said.

‘‘I used to be a goalkeeper actually when I started out.

"I used to keep when I was in primary school.

"My coach banned me every time and he would always tell me ’no‚ no‚ no football‚ no soccer.’

‘‘I would always steal some times and play with my friends‚ so I have been doing it for a while.”

Sundowns coach Mosimane said it was a privilege to train with the revered athletics legend and he joked that he would sign him if he had the chance.

‘‘It’s a good thing he is a free agent and we can sign him in any position he wants‚” Mosimane joked.

‘‘He’s a tall striker‚ he’s got the height‚ goalkeeper‚ centre-back‚ he cam play wherever he wants.

‘‘We respect you (Bolt) for what you have done‚ what you contributed not only to athletics but to the world‚ giving hope that anything is possible.

‘‘You have done your job and it is for us to welcome you here and make you feel special because you are special.”