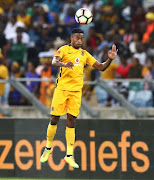 Winger William Twala has been loaned from Kaizer Chiefs to Maritzburg United for the rest of the 2017-18 season‚ Chiefs announced on Wednesday.

On the final day of the January transfer window‚ Twala‚ who has seen less action at Amakhosi this season‚ and whose prospects have diminished with the arrival of Siphelele Ntshangase and Leonardo Castro at the Soweto giants‚ joined Maritzburg on loan.

Chiefs Tweeted: "The Club would like to confirm that William Twala will join Maritzburg United on loan for the remainder of the 2017/2018 #AbsaPrem season.

"We wish him well during his stay at United."