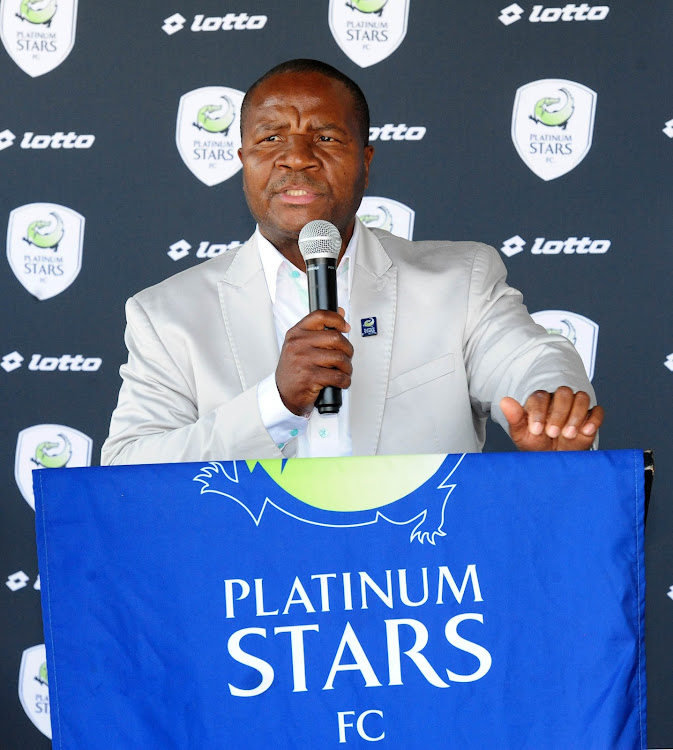 Platinum Stars chairman Cliff Ramoroa during the club's media day at Royal Bafokeng sports Palace in Phokeng on 16 August 2017. Ramoroa vacated his post as of 1 February 2018, a day after the club announced it was sold to a consortium led by current head coach Roger De Sa.
Image: Aubrey Kgakatsi/BackpagePix

Outgoing chairman of Platinum Stars‚ Cliff Ramoroa‚ says he has got nothing to hide and if there are criminal charges of corruption against him‚ let them be handled by the police.

Ramoroa‚ it was revealed this week‚ is at the centre of 35 charges of money laundering‚ corruption and fraud being investigated against Stars' board members by the Hawks.

At a press conference to announce the new owners of Stars in Rustenburg on Thursday‚ Ramoroa was asked about the charges amounting to millions that have been opened against him.

“A case has been opened at the police‚ I was told.

"I have never received it.

"I have never received more information in terms of that‚" said Ramoroa‚ who was part of the management that have sold the club to Rawat Petroleum for R22.5 million.

"And I've said it more than once‚ that if there's a case opened at the police‚ the police will do what they are supposed to be doing.

"And there's not much I can say in terms of that because it's also sub judice.

"And I have said it‚ our books are open. Royal Bafokeng is a very big company‚ which has got corporate governance.

"And they are willing to deal with that. And I think that should be closing as an answer to that question."

Kgosana Rapetsana‚ representing the Royal Bafokeng Nation‚ who were 100 percent owners of the club‚ backed Ramoroa against the claims‚ saying as the previous owners of the club they were not aware of any corruption taking place at Stars.

Asked if there had been any internal investigations in the claims made against the board‚ Rapetsana said: "In terms of corruption and embezzlement of funds‚ we are saying we are a corruption-free institution.

"So we don't allow any corruption. This is why we are saying‚ 'Let justice take its course'.

"If there was anybody who was corrupt at Platinum Stars and there is a charge against that person‚ we would allow the process to go on."

The investigation by the Hawks has been opened reportedly after allegations made by Rustenburg-based businessman Thabo Mokgatle‚ who apparently failed in a bid to buy the club.

Johannesburg-based Rawat Petroleum are the company behind a consortium who have bought Platinum Stars from Royal Bafokeng Holdings for R22‚5 million‚ ...
Sport
3 years ago

The January transfer window has slammed shut with a number of Premier Soccer League clubs making significant changes to their squad.
Sport
3 years ago

If the Tendai Ndoro issue was a thorn in the Premier Soccer League’s 2017-18 season‚ now the wound is threatening to go infected.
Sport
3 years ago