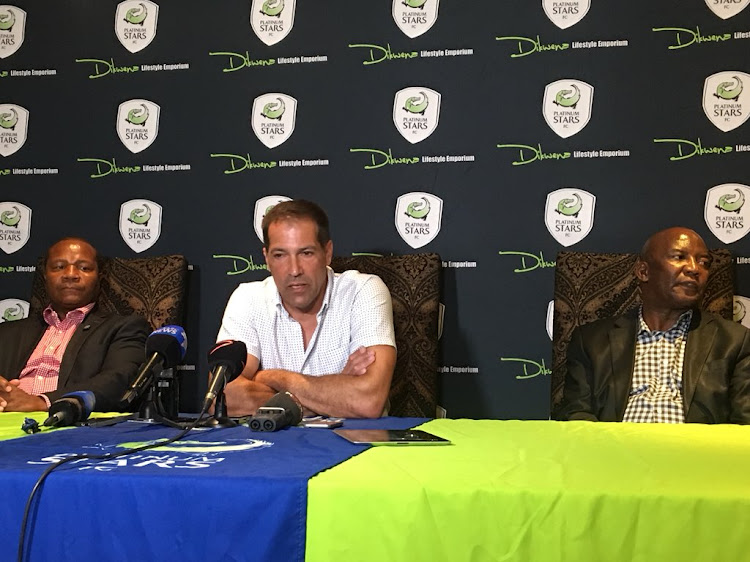 Johannesburg-based Rawat Petroleum are the company behind a consortium who have bought Platinum Stars from Royal Bafokeng Holdings for R22‚5 million‚ the club revealed on Thursday.

In a controversy-tinged‚ publicly open press conference at the team's base at Royal Marang Hotel‚ coach Roger de Sa revealed that he is part of a four-man consortium.

Two of the other members are based in Cape Town‚ De Sa said‚ and one in Johannesburg.

Emotional community leaders who attended the briefing alleged that there had been a rival offer of R33 million by a Phokeng businessman‚ Thabo Mokgatle‚ where Stars are based.

However‚ Royal Bafokeng representative Kgosana Rapetsana denied any knowledge of such a bid.

The sale of Stars‚ currently in last place in the Absa Premiership‚ went through on Thursday.

"Yes‚ we are a consortium. The club will not be moving from here. The colours are the same‚ the name is the same‚" De Sa said.

"We're not looking to do anything drastic right now.

"More important is our position in the league‚ and that's the main focus‚ and to try and get out of the position we are in."

De Sa said the other members of the consortium were "private people" who did not want their identities revealed.

Chairman Cliff Ramoroa‚ who it was revealed this week was allegedly at the centre of 35 charges of money laundering‚ corruption and fraud being investigated against Stars' board members by the Hawks‚ said his position at the club ended on Thursday.

The investigation was opened after allegations made to the Hawks by Mokgatle.

De Sa said he will take over some administration of the club‚ surrounded by their existing staff members.

He said it will be a similar arrangement to‚ "when I was at Wits"‚ referring to when De Sa once performed a coaching and administrative role at Bidvest Wits.

De Sa was pressed by the sceptical community leaders on whether the new owners' intentions to not move the club were for just the near future‚ or long-term too.

"We don't have intentions of moving. We have got a contract in place with the Royal Bafokeng that we are going to be staying here‚" he said.

"We're here. We're not changing anything for now‚ unless things change drastically.

"We're definitely here until the end of the season. That's non-negotiable.

"But (after that) why should we move if we've got one of the best facilities in the country and a beautiful stadium and a city that kind of accepts the team‚ and most of the employees work from here?

"We don't want to go and fight it out with other teams for stadiums and training venues and so on.

"So for now‚ it's a great facility. I think it is the best in the country."

Stars play at the 45 000-seater Royal Bafokeng Stadium and train at the world-class Royal Marang Hotel‚ the training facility purpose-built as a base for England at the 2010 World Cup.

Rawat Petroleum appear to be owned by a parent company based in Sudan.

The January transfer window has slammed shut with a number of Premier Soccer League clubs making significant changes to their squad.
Sport
3 years ago

If the Tendai Ndoro issue was a thorn in the Premier Soccer League’s 2017-18 season‚ now the wound is threatening to go infected.
Sport
3 years ago