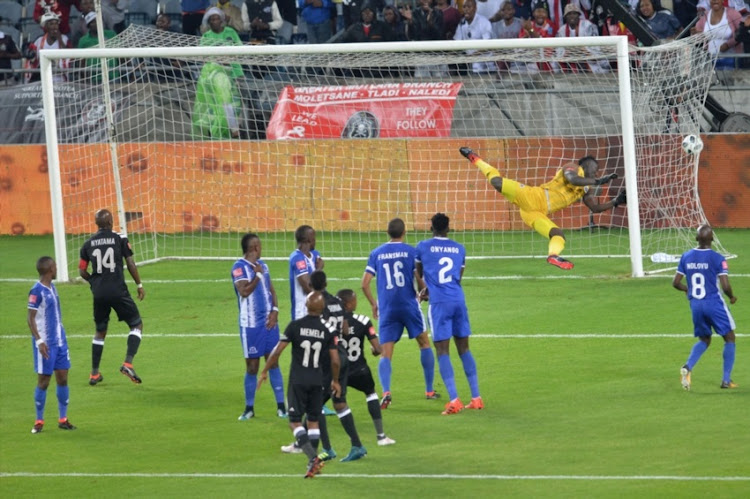 Thabiso Kutumela of Orlando Pirates scores a goal while goalkeeper Richard Ofori looks on during the Absa Premiership match between Orlando Pirates and Maritzburg United at Orlando Stadium on February 03, 2018 in Johannesburg.
Image: Lefty Shivambu/Gallo Images

Orlando Pirates are not the finished product, as displayed by a nervous last period of Saturday night’s 2-1 Absa Premiership victory against Maritzburg United at Orlando Stadium.

But Bucs are increasingly more scintillating for longer periods.

It’s the intelligence of coaches and teams in the PSL, and cleverness with which they find each other out, then respond to that, that detractors of the league – and South Africans do like to knock all things their own – are not quite seeing.

We would all like to see more goals. But this is a close, competitive and, as it enters its final third, at times explosive and wildly unpredictable league.

And so many of the goals scored in the second half of the season have been of a rare quality.

Following Percy Tau’s spectacular run and flick for Khama Billiat to finish and Mamelodi Sundowns to preserve their lead with a big win against Cape Town City on Friday night, Thabiso Kutumela in the 30th minute at Orlando produced a technically exquisite free-kick to give Pirates hope of keeping in touch with the Brazilians.

Happy Jele headed a second in the 48th. Siyanda Xulu pulled one back in the 74th.

Bucs coach Milutin Sredojevic might have looked as if he was responding to Thursday’s 3-0 shock to Ajax Cape Town with a defensive three-centreback (Gladwin Shitolo, Happy Jele, Ntsikelelo Nyauza) formation.

But a 3-4-3 that had wingbacks Innocent Maela and Mthokizisi Dube pressing the line like wingers to create a five-man frontline when Bucs had the ball was not conservative.

With Marshall Munetsi and Musa Nyatama in central midfield, Pirates had the cover to absorb one of the league’s quickest counterattacks, while the adaptable system allowed Bucs, with a high workrate, to press United and pin them back.

Electricity crackled through this game. Fadlu Davids’s superbly conditioned young Maritzburg, after some early breakouts, were pushed back.

Bucs earned a free-kick 24 metres out, to the right, that Kutumela curled with power and precision round the outside of the wall for the lead.

Maritzburg goalkeeper Richard Ofori was unsighted by an innovative, never-seen-before linking of arms then three quick steps back by three Bucs players shielding the ball.

Bucs hammered their second nail as a clinical corner just after the restart, by Memela, found Jele at the near post to glance past Ofori.

Memela struck the upright from the tightest of angles. The contest, though, was far from over. United committed numbers forward and Bandile Shandu struck Jackson Mabokgwane’s left pole with a cracking drive.

Mabokgwane palmed an awkward free-kick by Mxolisi Kunene onto the same upright.

Xulu got up high to Deolin Mekoa’s free-kick to head home for a nervous last 15 minutes for Pirates.