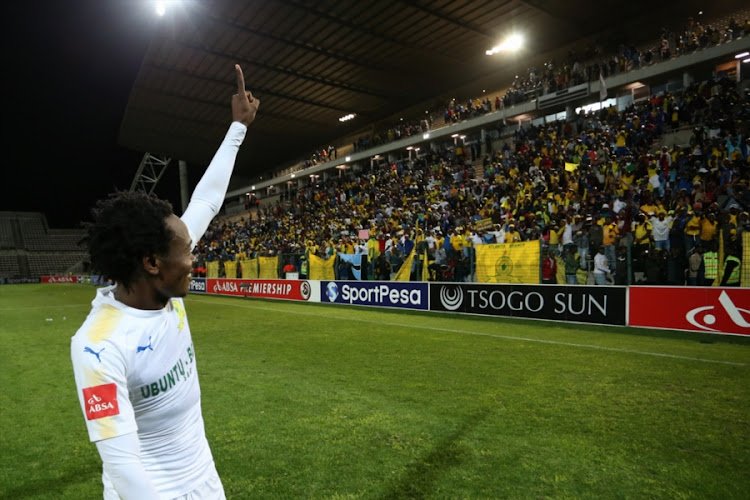 Tau got possession just outside the halfway mark‚ ran with the ball with pace beating about three players on his way before brilliantly using both feet to scoop it towards his Zimbabwean striking partner Billiat‚ who volleyed it home for his sixth goal of the season.

The goal which was scored early in the second half‚ helped Downs to cement their top position on the Absa Premiership log where they now lead Orlando Pirates with five points with a game in hand‚ with ten matches to wrap up the season.

"We cannot be claiming that we are coaching that (Tau's skills)‚" said Mosimane of the 23-year-old's remarkable run.

"That's an individual brilliance. Percy can do more hey. It's a minefield that has not been mined enough.

"There's more to come‚ but that was a brilliant contribution of Percy to that goal.

"That was a big beautiful goal in a big game.

"I think his assists‚ his goals and the way he plays at this time‚ puts him in a big position to be a footballer of the year because he's doing it week in and week out."

Mosimane further reiterated that Tau was now ripe for a European move but he must first win the league title‚ Nedbank Cup and the African Champions League with them this season.

Mosimane confirmed without mentioning names that Sundowns have received offers from European teams but he feels he must go to one of the top five leagues in Europe.

"The quality and the mentality says he's ready for Europe‚" said Mosimane.

"But I'm a very conservative coach. I always want to polish and he must shine. He must be either black or white not grey.

"I think the best place for Percy is go to one of the top five leagues in Europe.

"What will take him there is to be the best player in Bafana Bafana‚ score goals‚ to win the Champions League for us‚ to win the league and win the Nedbank Cup.

"That's the passport for Percy to go to big leagues. At this point in time he can go to any European league‚ they are so many.

"You've got the Sweden the Denmark and anywhere. But in my opinion he has to go to one the best five leagues in the world."

Tau himself played down his contribution in Billiat's goal‚ saying it was important for the team to get the goal and win the match.

"I was just happy that I contributed to the goal and Khama finished it very well‚" said Tau.

Mamelodi Sundowns will have to be wary of one of their own home-grown talents when they travel to Cape Town All Stars for a Nedbank Cup Last 32 clash ...
Sport
3 years ago

ALL eyes will be on BidVest Wits striker Lehlohonolo Majoro when he lines up against his former employers Cape Town City in the Last 32 of the ...
Sport
3 years ago

Cape Town All Stars coach Brandon Truter says he has had to use all his man-management skills this week as the club prepare to face Mamelodi Sundowns ...
Sport
3 years ago