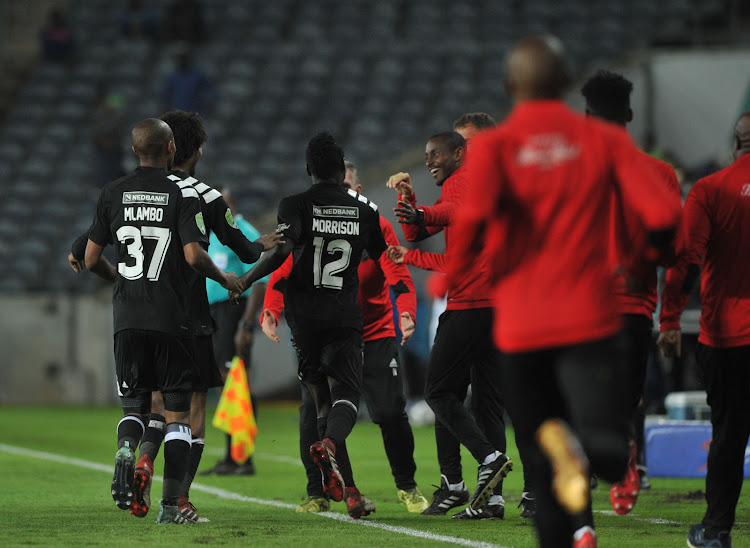 Orlando Pirates' striker Bernard Morrison celebrates with the bench and teammates after scoring a goal during the Nedbank Cup Last 32 match against Ajax Cape Town on 10 February 2018 at Orlando Stadium.
Image: Sydney Mahlangu/BackpagePix

Bernard Morrison was brought into a meeting with Orlando Pirates’ coaches ahead of being included in Saturday night’s 2-0 Nedbank Cup last-32 victory against Ajax Cape Town where the Ghanaian was effectively told not to embarrass them.

After a year-and-a-half of disappointment having been signed with high expectations from AS Vita‚ Morrison took his chance with a stunning brace at Orlando Stadium that might well be a breakthrough for the highly-rated forward.

Bucs coach Milutin Sredojevic had his share of injuries‚ but still opted among his six changes to make some that were unenforced‚ including Morrison in the frontline ahead of in-form Luvuyo Memela.

“I want to give thanks to the technical team for this opportunity to represent the club again‚” Morrison‚ who had made eight previous appearances in 2017-18‚ three of which were starts‚ and last played in November‚ said afterwards.

“There was speculation going around that I would be leaving.

“Before the game I had a meeting with the coaches. They told me that they were giving me the opportunity‚ though I had been on the bench and not been playing.

“So for me‚ starting ahead of those who had been playing was a risk for the coaches because people could be saying those players had been there before me. So why did they give me the opportunity?

“So if I didn’t grab it with both hands‚ it meant I didn’t really appreciate what they gave to me.

“So I decided to return the favour by giving them a good performance.”

Morrison displayed a devilish sense of humour both on and off the field.

He and teammates‚ after his second goal‚ produced and outlandish celebration imitating the walk on all fours‚ and lifting of the leg‚ of a dog.

In the post-match press conference Morrison had journalists in hysterics with his antics.

At one stage he stopped proceedings to greet‚ and point out to his coach Milutin Sredojevic next to him‚ someone from Ghana.

At the end of the briefing Morrison joked‚ to a question on whether Sredojevic would be interested in acquiring Kermit Erasmus‚ out of contract now in France‚ that the motivation was for the current Bucs players to be replaced.

Sredojevic‚ said the player is one of the characters of Bucs’ squad.

The coach stressed‚ though‚ that now that Morrison had made a bid for a first-team place again‚ the Ghanaian needed to start to maintain consistency.

“He’s a great guy from Takoradi in Ghana who I know from before.

"And we were really pleased to have him here – he’s a good spirit in the team and always in good mood‚ and he’s the one spicing up that good mood in the team‚” Bucs’ coach said.

“He has worked hard from that time until now‚ and it’s paid him back. But at the same moment I would request from him that this is still nothing of what he is capable of.

“Because one performance will mean nothing but many more is what we are expecting from him.”

Champions-elect Manchester City looked strangely out of sorts during the first 45 minutes of their Premier League clash with Leicester City on Sunday.
Sport
3 years ago

An injury-hit Orlando Pirates produced an effective performance muscling Ajax Cape Town out of the game at Orlando Stadium for Saturday night’s 2-0 ...
Sport
3 years ago

Two well-taken first half goals by winger Kobamelo Kodisang and striker Eleazar Rodgers were enough to see Bidvest Wits taking a healthy lead to the ...
Sport
3 years ago

Komphela a Chiefs coach ‘looking at the beauty of the stars’

It’s remarkable what some decent results can do for the lyricism of a Kaizer Chiefs coach.
Sport
3 years ago